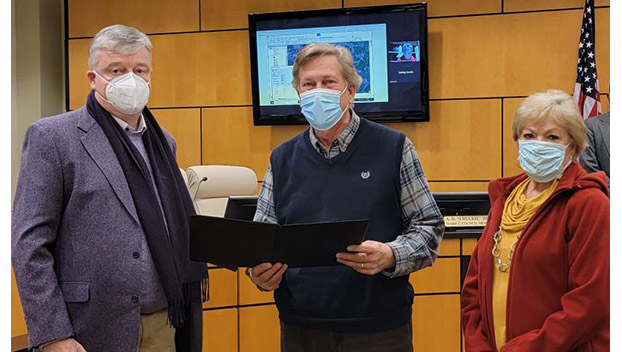 Mayor David Whitus presented a resolution of appreciation for the WFLO radio station that has entertained and informed Farmville and the surrounding area for many years at the Jan. 12 Town Council meeting. Pictured from left are Whitus, Francis and Chris Wood.

On Jan. 12, the Farmville Town Council held its first monthly meeting of the year to discuss redistricting as well as other matters.

The Town Council discussed the process of redrawing election boundaries after receiving the 2020 census numbers.

Melody Foster from the Commonwealth Regional Council was on a video call to go through legislation changes made for this year and what needs to take place to bring the numbers where they need to be.

The General Assembly passed legislation that required Virginia localities to use reallocated prisoner populations for redistricting purposes. This means that prisoners are counted as part of the census of wherever their residence is instead of wherever they are being held. However, the prisoners’ demographics were not recorded, so Farmville’s numbers reflect the true population in the town now.

“All you’re actually working with for the redistricting are the totals,” said Foster. “So again, the demographic data that you will see that it is being utilized is based only on the true census numbers, so that’s a little bit tricky.”

Also, the U.S. Census injected what it calls noise to ensure the privacy of citizens in each block, which in some cases causes information to spread to nearby areas if they feel that the information gathered tells too much. Because of this, one block has 573 people registered even though the block, in reality, only contains a parking lot. Another issue is that another census block shows that negative-93 people live there.

The Town Council can challenge the US Census on the noise of 573 people in a parking lot, and Foster believes it would have a strong case. However, the redistricting must be done 60 days before the next election, which are the primary elections in June. Since the 2020 numbers were delayed, there is no time to challenge it and the Council agreed just to push forward.

“It’s a numbers game,” said Foster. “It’s a matter of moving blocks around to achieve what you need to do to get your numbers all lined up.”

The council appointed the new development director, Lee Pambid, to help with the redistricting along with Ashley Atkins-Austin, the Geographic Information Systems coordinator. After working with Foster, they will come to the Town Council and have a public hearing to inform folks of the changes and receive input. Foster is confident that they will have at least the first scenario available by the February meeting.

• The council gave a resolution of appreciation to hometown radio station WFLO, which recently ceased its local AM and FM operations after 75 years. A copy of the resolution was presented to Francis Wood, who served as president and general manager of the radio station.

• Julie Moore of Brown Edwards & Co. LLP presented the town’s 2020-21 audit. According to Moore, the town had a clean, unmodified opinion, which every audited entity strives to achieve. The town also had no new findings and some of its prior findings were decreased in significance while some went away completely, showing that the town is moving in the right direction.

• Chief Andy Ellington gave an update from the Farmville Police Department. Officers have identified and have a warrant for the shooter’s arrest from the Christmas Eve shooting. Two juveniles received tickets due to the noise complaints and the judge had no issue prosecuting them due to the loud noise ordinance in the town code. Cameras have identified that one thief is behind the multiple trailers that have been stolen recently and the police department is making progress on that investigation.

• The council discussed COVID-19 revenue loss and the use of federal ARPA funds after calling a special meeting on Dec. 21. At the special session, the council voted to give a bonus to staff and then refund the town with ARPA funds after calculating a loss. The official loss was supposed to be announced at this meeting. However, due to a rule change, the numbers were not ready to be reported.

• The council voted for the town manager to sign an option agreement with AC Power LLC. AC Power will put in solar panels at the old landfill site as it has worked with numerous projects at landfill sites before.

• The council voted to extend the extra paid 80 hours of leave for those diagnosed or exposed to COVID-19 through the end of the fiscal year in June. These hours are for town employees and can only be used once.

• The council agreed to give a partial refund to Kentucky Fried Chicken-Bacon Enterprises Inc. on its 2021 business license. The company sold its franchise in November and new owners purchased the license and the personal property tax and utility bills have been paid.

• The council moved the discussion of upcoming vacancies on the Farmville Industrial Development Authority and the Board of Zoning Appeals to the February meeting.