Rescue Squad gets a puppy in time for Christmas 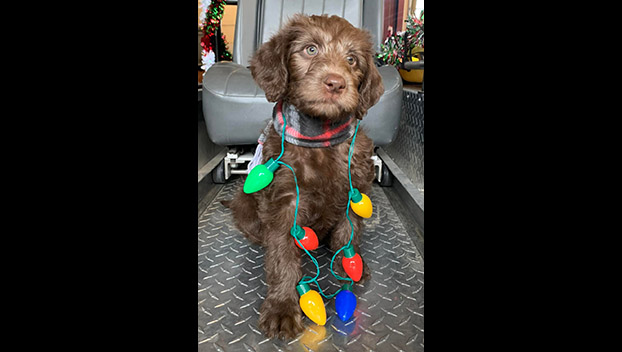 Pawamedic Eddie is the newest edition to the Prince Edward Rescue Squad.

The rescue squad has a new member of their team that is spreading good cheer and boosting productivity.

Pawamedic Eddie is a nine-week-old labradoodle that joined The Prince Edwards Volunteer Rescue Squad on Dec. 4. Eddie is a therapy dog who will help by giving emotional support to the squad as the COVID-19 pandemic lingers on.

According to Deanna Lester, executive director with Prince Edward Volunteer Rescue Squad, many studies have shown the negative effects on mental health due to the pandemic, especially for first responders and those on the front lines. Along with studies showing how therapy dogs have a positive impact on helping boost emotional support, getting a puppy seemed like the right next move.

“Being a front line worker can be physically and mentally challenging,” said Lester. “Workers feel overwhelmed and under supported. Therapy dogs have shown to reduce stress, lower blood pressure and improve moods and mental state. Productivity also goes up along with mental status. It brings some normalcy to the station life.”

Eddie will be present at the station to give workers comfort and support. He will also accompany the squad on mass casualty or fatal calls.

He is currently the only therapy dog adopted by a rescue squad in the area. However, there are others nationwide that have adopted ones, especially in bigger cities.

“Los Angeles has a program and has seen great results from it,” said Lester. “Seeing the trend, it seemed like a great idea for us.”

As Eddie is still just a puppy, he spends his days taking naps and enjoying the new friends he’s made on the rescue team and keeps everyone on their toes. Luckily being so young, he has adjusted easily to the unpredictable life of a first responder, including loud sirens and a stream of changing friends with each shift.