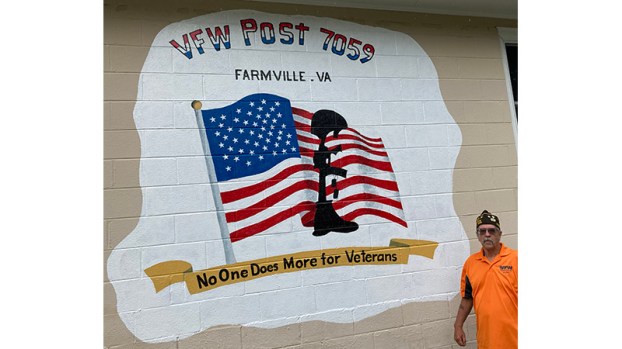 VFW 7059 Post Commander Dean Lord stands in front of the completed mural on the side of the building on Graham Road. He completed the mural in about a week with the help of his son, Anthony, and wife, Flora. 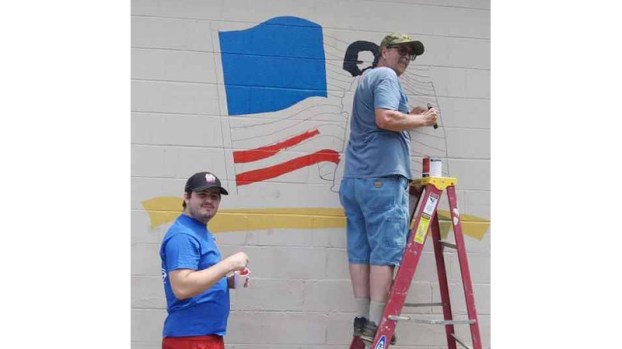 VFW Post Commander Dean Lord paints part of the battle cross portion of the mural while his son Anthony works on a red stripe of the American flag. 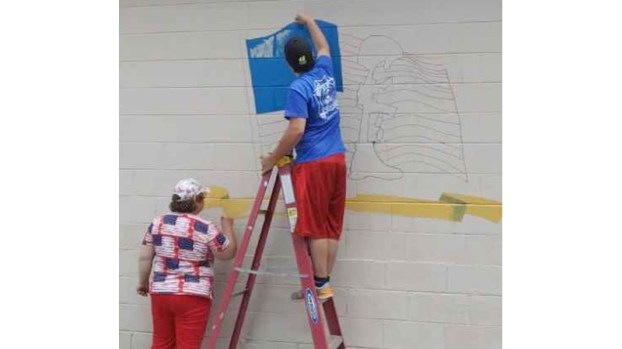 Anthony adds some blue to the American flag as Flora paints the banner for VFW’s national slogan, “No one does more for veterans.” 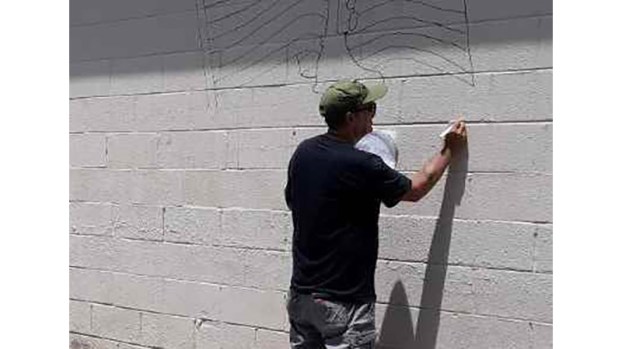 Lord begins to sketch out the mural in pencil on the cinder block wall.

The plain beige wall on the side on VFW Post 7059 provided an opportunity for Dean Lord to combine his love for his country with his talent as an artist.

The Vietnam War veteran who moved to Farmville from upstate New York three and half years ago heard his fellow Veterans of Foreign Wars post members discussing the idea of painting something on the side of the building. He knew he was the man for the job.

“When I joined this post, they were talking about it,” Lord said while ducking into the VFW Post on Graham Road to get out of a recent summer rain. He asked if they had a design or someone to paint it. They did not. Lord told them he could help them.

“I’ve been an artist pretty much all of my life,” he said. “My college degree is in fine arts.”

The mural includes the American flag on a white background with the battle cross of a helmet on top of a gun with boots and dog tags. A slogan underneath reads, “Nobody does more for veterans.” That’s the national slogan of the VFW.

“Basically what this represents is Old Glory, which is what we are all about. Number two — it represents the fallen who have given their lives to defend our flag and our country, and number three — it kind of puts out our commitment to current veterans serving,” Lord said. “It kind of does three things all at once.”

It took Lord about a week to finish the mural with the help of his son, Anthony, and wife, Flora. He said he could have done it a lot faster if the weather had been cooler.

“The people who see it say it’s amazing,” he said. “They just love it. People in the post are just in awe of it. I have not run into one single person who did not like it.”

Lord, who serves as Commander for Post 7059, was a member of a VFW post in New York before moving to Farmville. Finding a location with an active VFW post was one of the things he and his wife looked for when they moved to Farmville. The Farmville post has approximately 175 members.

Lord served in the Navy from 1966 until 1970. He spent most of his time aboard an aircraft carrier, the USS Valley Forge, in the combat zone about a mile off the coast of Vietnam.

“We would send Marines back and forth into combat,” Lord said.

He also served aboard the USS Hector, a repair ship who spent most of its time a half mile off the coast.

“We pulled into the deltas and repaired the swift boats,” Lord said.

He said the VFW’s commitment to service to other veterans and its willingness to help with his son’s Eagle Scout project, a veteran’s memorial in the town park, is what led him to join the group while he lived in New York.

He said the organization provides goodie bags and visits vets in nursing homes. They also help with simple home repairs for disabled vets. A big part of the organization’s work is helping veterans find benefits and organizations that can help them once they return home.

“We steer them toward other organizations to help them get veterans’ benefits,” Lord said. “There are a lot of veterans out there who came home and they have no idea what their benefits are.”

“This is one of the greatest posts I’ve ever belonged too,” Lord said of the Farmville post. “If someone is in need, they are right there, just like that. We are like a family, and I feel that.”