Myrtle the Turtle has a new home at Twin Lakes 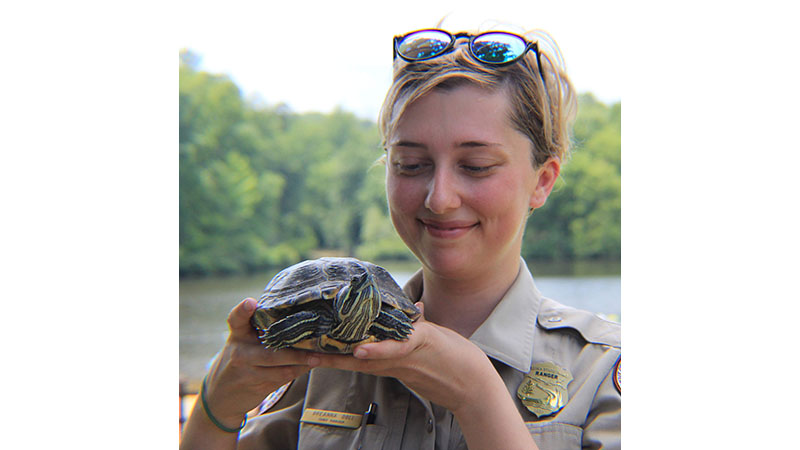 Chief Ranger Breanna Doll shows off Ranger Myrtle the Turtle recently at Twin Lakes State Park. A new habitat was recently completed to give Myrtle, a red-eared slider some room to swim and stretch her legs.

Myrtle was a turtle without a home.

The invasive species of red-eared slider currently has a very fine turtle home and has been promoted to Ranger Myrtle at Twin Lakes State Park, but how she got to her 300-gallon turtle habitat complete with plexiglass, plastic grass and dirt for digging is a story Chief Ranger Breanna Doll loves to tell.

Myrtle was taken out of the wild by a well-meaning young person who saw Myrtle trying to cross the road. Instead of just moving the turtle to the side of the road where she was heading, the young person took Myrtle home to keep her as a pet.

After three years, Doll said the young person was making a life change, either moving into college or getting engaged, and Myrtle needed a new place to hang out.

The young person’s mother, who worked for the Virginia Department of Conservation and Recreation, asked all the Virginia state parks if they could adopt Myrtle. Because the red-eared slider was an invasive species and also because it has been kept domestically, Myrtle could not be released back into the wild.

“What ended up happening is no one wanted Myrtle,” Doll said. “I think that has a lot to do with how difficult they can be to take care of.”

The person in Doll’s position at Twin Lakes State Park before her agreed to take Myrtle because the only other option was having the turtle put down.

“When she first got here, we really were not prepared at all for her,” Doll said of Myrtle. “Our Friends (of Twin Lakes State Park) group actually purchased the 55-gallon glass aquarium, and then I found something online that I called her apartment that sat on top of the tank so she was able to have her whole tank full of water and then get out to dry.”

Myrtle stayed in the 55-gallon tank for four years. Turtles like Myrtle should be in tanks of at least 150 gallons.

“There were nights when I could not fall asleep because I was thinking about Myrtle in her little tank,” she said.

Doll and the other rangers began raising money for a bigger habitat for Myrtle, but the going was slow. In three years of selling tie-dye T-shirts and other fundraisers, the group had only received around $400.

Then while visiting an aquatic animal friendly area health care provider, Doll mentioned Myrtle’s plight and the anonymous donor asked how much Doll needed to get Myrtle out of the fish tank. 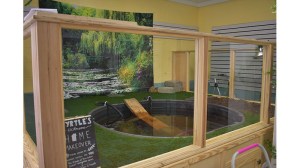 Ranger Myrtle’s new home at Twin Lakes State Park features a 300-gallon tank surrounded by an area of dirt and plastic grass where she can climb out a dry off whenever she wants.

With the help of a local retired carpenter and $1,500 from the anonymous donor, Myrtle moved into her new place last month. The wooden platform with a hole for a 300-gallon tub, surrounded with plastic grass and dirt, gives Myrtle plenty of room to stretch out and visitors a chance to see and learn about her.

“When she first got in it, that was the first time I saw her just put all of her arms out and stretch her neck out,” Doll said. “I did not realize how big she really was until she was able to really do that.”

Once she was in her new habitat, Myrtle started sliding her legs along the grass. Doll said she thought Myrtle was having a hard time getting traction on the plastic grass. It was later when she added dirt to the habitat that she understood what Myrtle was trying to do.

Then came a surprise.

Doll took Myrtle outside at the lake for International Turtle Races Day.

“I thought this would be a great opportunity for us to introduce people to Myrtle, and I’ll time her, and every time I pick her back up I’ll see how long it takes her,” Doll said.

But instead of instinctively running toward the lake as Myrtle typically did on her previous outdoor adventures, Myrtle just started digging.

“She dug for an hour,” Doll said. “That girl was exhausted.”

After finishing digging, she just covered the hole back up.

“That was strange,” Doll said. “So we brought her back in.”

Later in the day, after Mrytle took a long nap from all the digging, Doll looked at the water in Myrtle’s tank and saw something white. Myrtle had laid an egg for the first time since she had been at the park.

“I just felt so happy for her,” Doll said. “It’s such a basic, simple thing, but it’s a really important sign of their health and stress levels.”

In the future, Doll plans to add some grow lights to Myrtle’s habitat to add some aquatic plants for Myrtle to eat.

Doll said one of the goals of having Ranger Myrtle at the park is to convince people to leave turtles in the wild where they belong.

“I wish she had not been taken from the wild, but I’m hopeful that if I can convince one person to not take a turtle out of the wild with Myrtle’s story that it makes it worthwhile,” Doll said.

Ranger Myrtle can be seen in her habitat inside the concession stand building at Goodwin Lake.