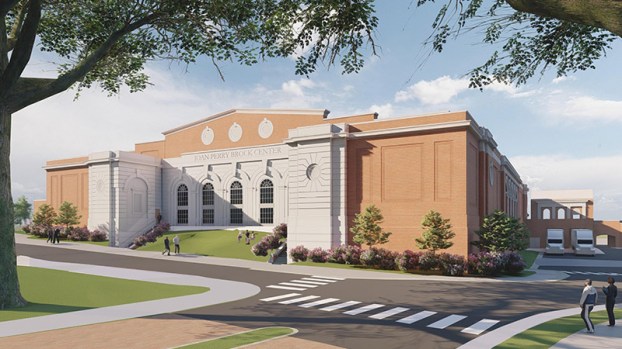 This is the view from the side facing the town of the Joan Perry Brock Center, a 72,000 square foot, 3,000-seat arena designed for basketball games, lectures and concerts. The new arena is expected to open the summer of 2023. 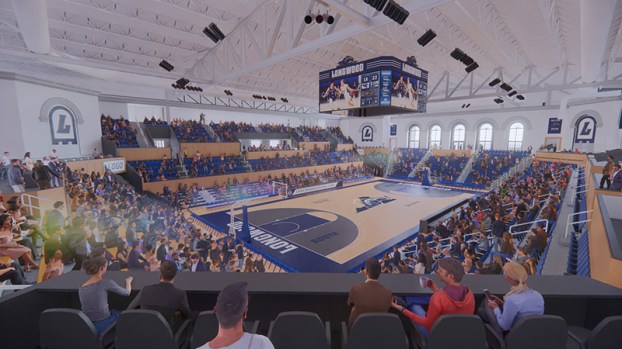 The Joan Perry Brock Center is expected to open in the summer of 2023. The 3,000 seat arena will be the new home for the Longwood basketball teams. 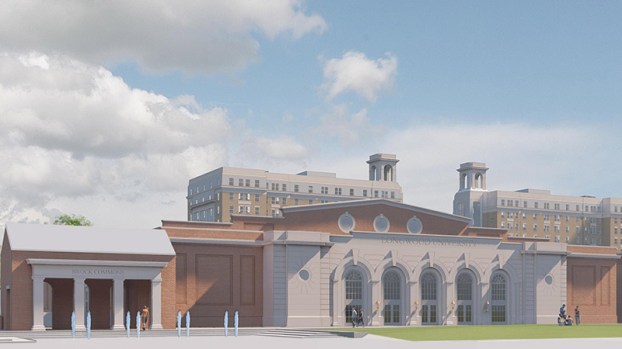 This is the view of the Joan Perry Brock Center that on the Commons of Longwood University. 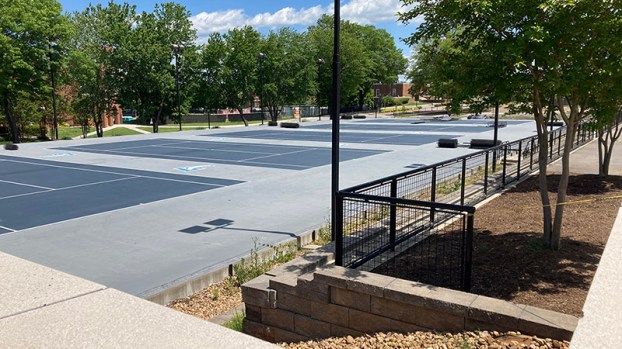 Currently, Longwood's old tennis courts are the only thing occupying the site where the Brock Center will begin to be built in a few weeks.

A new events facility with the potential to transform both the Longwood University campus and the community will begin to rise from the old tennis courts beside Willett Hall in the coming weeks.

The Joan Perry Brock Center will serve as a new home for the Longwood men’s and women’s basketball teams as well as a space for campus events, lectures and concerts.

Bordering the Brock Commons and Spruce Street, the Brock Center will face the university on one side and the town on the other. The entrance of the arena will only be a short walk from South Main Street.

“It’s a game changer for our community,” Farmville Mayor David Whitus said. “Imagine, being able to attend concerts, statewide and regional sporting events and every other kind of event that a venue of that nature can host.  It will impact our restaurant and lodging sales, translated – increase meals and lodging taxes for the town. It will bring more people to our retail stores and help improve Farmville’s visibility.  It’s a win-win-win.  Not to mention what it does for Longwood athletics and graduations.”

The idea for the facility had been on the table since Patricia Cormier was president of the university from 1996 to 2010.  The plans were given life in 2019 when Joan Brock of the Longwood Class of 1964 gifted $15 million, Longwood’s largest gift ever, to the university to jumpstart efforts to build the 72,300 square foot facility. Preliminary estimates for the cost of the facility in 2019 were between $35 and $40 million.

“This elegant building will be a beautiful addition to our campus and a tremendous resource for the broader regional community as a space for athletic, musical and other events,” Longwood President W. Taylor Reveley IV said. “It will serve to bring us together in new ways and add to the momentum of our college-town vibrancy. We are immensely grateful for Joan Brock’s generosity to make this possible.”

The 3,000-seat arena is expected to open in the summer of 2023. It will replace Willett Hall as Longwood’s home for basketball. Willett Hall was built in 1980 and seats just over 1,800.

“It will be a rallying place. Those shared experiences are very important, locking arms with your neighbors, going forward with a common goal,” Brock said in a quote on the website announcing the project.

Prince Edward County Administrator Doug Stanley said the new arena will provide a boost to all aspects of the community.

“The convocation center will provide our community with a state-of-the-art facility to hold athletics, concerts, and other events just a stone’s throw from Main Street and Downtown Farmville. We appreciate the thought that Longwood put into the project to incorporate it into the heart of campus and downtown,” Stanley said. “Once open, the facility should provide a boost to downtown businesses including restaurants and hotels and will hopefully spur additional investment throughout the community.”