COLUMN — Ruling seems to give town control of statue 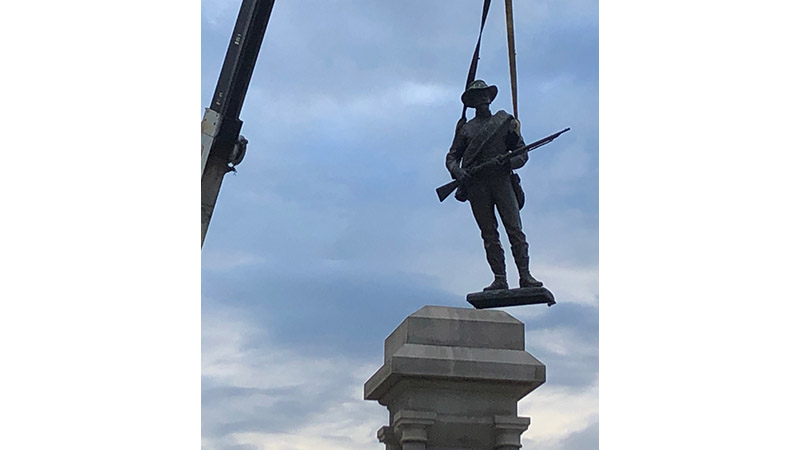 The Farmville Town Council made a quick decision to remove the Confederate Soldier from atop its pedestal and place it into storage the night of Thursday, June 18. The statue remains in storage, its future undetermined. (Photo by Alexa Massey)

A recent Virginia Supreme Court ruling could free up the Town of Farmville to finally determine the fate of the town’s Confederate statue.

The ruling regarding the Robert E. Lee statue in Charlottesville struck down a lower court decision prohibiting the removal of the Confederate general on a horse a block away from the Downtown Mall due to a 1997 state law prohibiting municipalities from removing Confederate statues. The court said the law only covers Confederate memorials put into place after the 1997 law went into effect.

That would mean Farmville’s statue, which was placed in October of 1900, is not covered by the law used in 2017 to prohibit Charlottesville from removing the Lee statue. According to Friday’s ruling, the town can basically do whatever it wants with its Confederate statue.

The bronze soldier was removed from its concrete pedestal on High Street the night of June 18 of 2020 for public safety reasons. The statue was placed in storage where it has remained ever since. Because the Town Council made the decision to remove the statue 12 days before the state’s new law providing a method for municipalities to properly determine the future of the Civil War relics, council has been waiting for an opinion from the attorney general’s office before taking further steps.

Town Attorney Gary Elder has not returned an email asking if he interprets the court’s decision as giving Farmville complete control of the statue. I also copied Farmville Mayor David Whitus on the message, and he said he has the same question.

Vice Mayor Chuckie Reid has asked Elder at the end of nearly every council meeting if he has received a response from the Virginia AG, with the response always being that no response has been forthcoming. The attorney general’s office did acknowledge receipt the town’s request for an opinion.

It appears the attorney general did not send an opinion because Friday’s decision clears up the entire issue for any municipality in this situation.

While the bronze portion of the statue has been taken away, the large concrete pedestal remains on High Street as a memory of what was once there. During an August 2020 public hearing, many speakers promoted the idea of relocating the statue to the town’s Confederate Cemetery.

Hopefully this court decision will be the impetus to allow Farmville to resolve the Confederate statue issue quickly.

ROGER WATSON is editor for The Farmville Herald and Farmville Newsmedia LLC. His email address is Roger. Watson@FarmvilleHerald.com.

COLUMN — Detective Entrekin goes above and beyond for…