In search of the southern grape fern 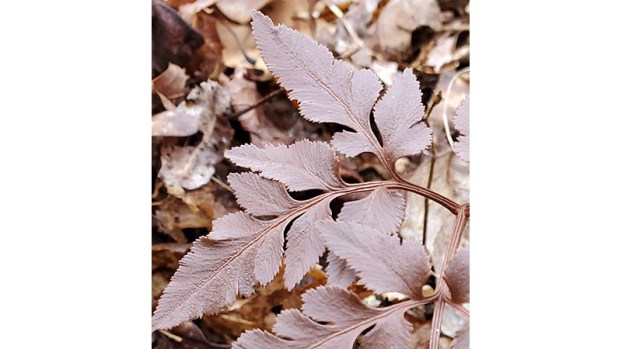 The southern grape fern has a distinctive reddish bronze color in winter. The sporangia on the fertile frond are said to resemble clusters of grapes. 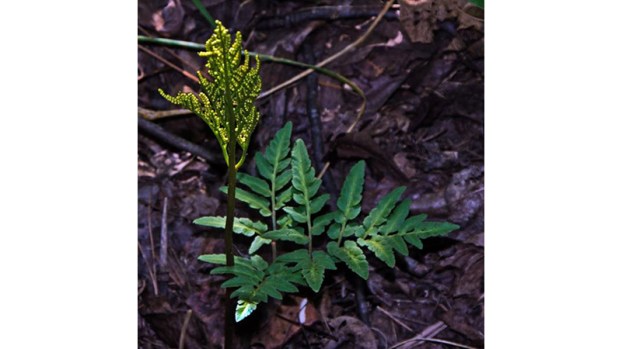 I’ve always been fascinated by ferns.

They’re old. So old that ancestors of modern ferns were here long before the dinosaurs. Ferns just seem to have an air of mystery that has troubled humans for ages. They’re different from other plants.

Ferns don’t have typical seeds or even flowers and, yet, they manage to reproduce. Some are evergreen, while others die back during cold weather. Some are tall and tree-like, while others are tiny. They must be the stuff of witchcraft.

Even early botanists were puzzled by ferns and worried that perhaps their growth was the result of an evil spell. Medieval herbalists thought ferns could be spied upon and caught secretly blooming. Indeed, many tried because success in collecting a fern’s seeds and eating them would confer the gift of invisibility. Spores weren’t known about until the mid-1800s when Willhelm Hofmeister identified them and finally provided an explanation for the odd behavior of ferns.

Eventually, people were no longer afraid of ferns and even carried sprigs for protection. A complete about face.

Here in Virginia, we have quite a variety of native ferns – more than 70 species, in fact. They grow in deeply shaded locations, in wet areas, on trees and even in hot, dry, rocky areas in full sun. Some don’t even look like stereotypical ferns.

One of my favorites is the southern grape fern. I went to Holliday Lake State Park in late January to photograph one I had seen earlier. At first, I couldn’t find the fern — it’s less than 12 inches tall and has a reddish bronze color in winter that helps it blend in nicely with the leaf litter. The trail had been flooded. There was another tree down on the trail, plus lots of debris, and at one point the trail had washed out. There were snow flurries. The fates seemed to have conspired to keep me from finding this plant. I finally gave up and began hiking back to the car and, yes, found two southern grape ferns just about where I thought they should be.

The southern grape fern is a native, evergreen member of the Adder’s Tongue Family. It’s a small fern that grows three to 12 inches tall. In late summer or early fall, it produces a new sterile frond (trophophore) that is roughly triangular shaped and somewhat leathery. The margins of the secondary divisions (pinnules) are denticulate. In late fall and winter, the sterile frond turns reddish bronze.

No matter which one you find, they’re both interesting and well worth seeing in the winter when the sterile frond is a beautiful bronzish red color and then again in early fall when the fertile frond appears.