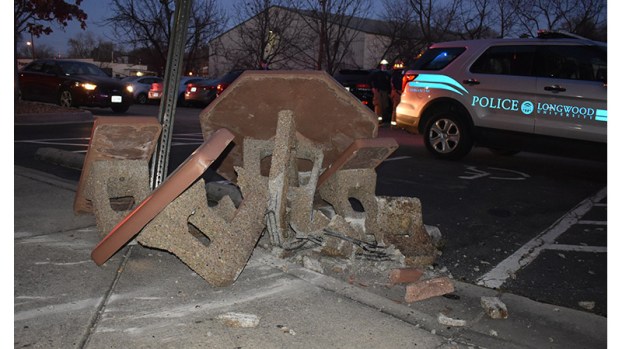 The speed at which the vehicle ran through the outdoor seating area is evident from the broken stone picnic tables, bent signs and debris strewn across the sidewalk. (Photo by Alexa Massey) 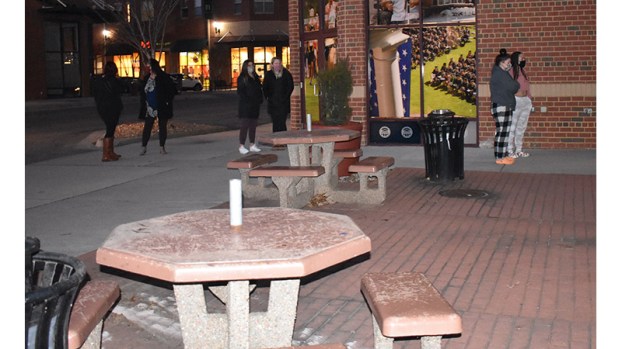 Bystanders examine the scene outside the Chick Fil-A at Longwood Landings. 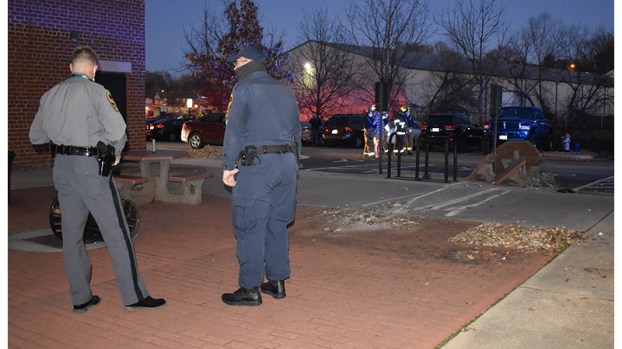 Few details are known about the incident of a Longwood student being struck by an SUV Thursday, Jan. 14, at the outdoor seating area of Longwood Landings, but it is clear the consequences of the incident could have been even worse.

The Toyota Highlander SUV hit two cars and drove through the outdoor dining area near Chick-fil-A, destroying a concrete picnic table. The incident sent the driver and a Longwood student to the hospital.

Casey Vandegrift, a Longwood student, was walking to meet her friend in the area when she saw a car parked on the sidewalk. An employee of the nearby CPR Cell Phone Repair store was talking to the driver.

“He (the driver) was just staring straight ahead, not talking, not moving, just with a dead stare,” she said. “As I was getting ready to walk across, he just revved up the engine and drove straight through. He hit a table and everyone was screaming to move.”

The CPR employee told everyone to move out of the way.

Vandegrift said the Longwood student hit by the SUV was sitting at the table the SUV crushed.

“The girl that was sitting at the table tried to run away as quick as she could,” she said. “She got hit in the hip area and landed on her back.”

Vandegrift said the driver continued through the parking lot and hit another parked car.

“The whole time he was on the gas,” Vandegrift said.

The Virginia State Police (VSP) is investigating the incident but has not released any information including the identity of the driver or the person injured.

Vandegrift said she learned the injured student was OK after the incident.

She described the driver as “lifeless, and in a dead stare.”

“He didn’t turn his head. There was no facial expression,” she said.