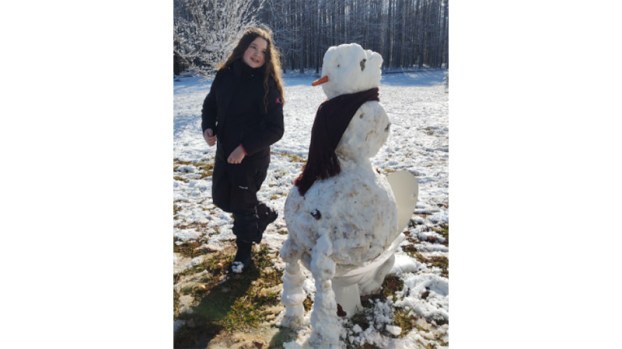 Leah Hall took advantage of this past week's small snowfall to build a snowman on a toilet. Her family is remodeling their bathroom so the toilet was available as a prop in the yard. We are always looking for great snow photos. You can use the Submit A Photo link at the top of our home page.

Farmville woke up to a cold 15 degrees Saturday morning and under a Winter Weather Advisory for potential snow moving in Saturday night.

The threat of winter weather is considered more severe in Buckingham and Cumberland counties. The areas just to the north are under a Winter Storm Warning. Cumberland and Buckingham counties are forecast to receive two to four inches of snow from late Saturday night through Monday. Prince Edward is projected to get between one and three inches of powdery fluffy frozen precipitation.

Snow is expected to begin around 3 a.m. Sunday and continue periodically as either snow, sleet or freezing rain all the way until noon Monday with periodic precipitation.

While Accuweather and the National Weather Service are predicting totals of less than four inches of snow for the area. Forecaster WxRisk.com is currently showing eight inches for the area of Prince Edward, Cumberland and Buckingham area.

As a result of the impending weather, Prince Edward County has announced that all of its convenience center sites will be closed Sunday.

Today may be a good time to stock the frig and snack cabinet, and maybe explore some streaming options for a potentially snowy Sunday.

The High Bridge at High Bridge Trail State Park in Farmville is in the midst of a three-month closure that... read more