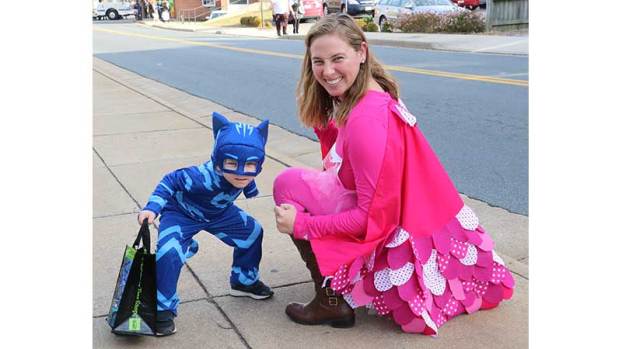 Beau Bulifant, left, and Katherine Bulifant strike a pose for a photo during Farmville's 2018 Halloween celebration. The downtown Halloween activities will not take place this year. (Photo by Titus Mohler)

Town Council bans ghosts and ghouls due to COVID-19

The Great Pumpkin will not be coming to Farmville this year. Once again, the COVID-19 pandemic has proven to be all trick and no treat.

After extending its emergency ordinance banning gatherings of more than 50 people another 60 days, Farmville’s Town Council agreed unanimously to cancel the downtown Halloween trick-or-treat event and also canceled trick or treating in town, particularly on the Avenues, which typically see hundreds of little goblins and ghouls each Halloween night.

The vote came during the council’s Wednesday, Oct. 7, work session.

The trick for the town will be enforcing the ban.

“That’s the $64,000 question,” Mayor David Whitus said, replying to Vice Mayor Chuckie Reid’s question about how the town would enforce a ban on a common holiday tradition. “There’s probably not a strong enforcement mechanism there other than the fact that the town says, ‘We do not have trick or treating.’ Hopefully, people are strongly discouraged.”

Whitus pointed out that the Virginia Department of Health and Centers for Disease Control and Prevention guidance are discouraging groups after seeing more pediatric COVID cases and cases among young people.

“Hopefully, people will abide by it,” Whitus said.

Council member Brian Vincent, who lives in the area of the Avenues and said he has trick-or-treated on those streets, said the area can get very congested on Halloween night.

“In that hour or two when it’s congested, those sidewalks are packed with folks,” Vincent said. “I just don’t see it as a safe venture. I urge the town residents and the county residents to recognize the situation we are in.

“We’re all trying to figure out how to mitigate this issue without overstepping bounds, but I’m not sure there is an easy answer.”

The emergency ordinance banning gatherings of more than 50 people was originally established in August as Hampden-Sydney College and Longwood University students returned to town. The ordinance has exceptions for religious ceremonies, schools, weddings, funerals or demonstrations on public property. A fine of as much as $300 is the punishment for violation of the ordinance. The ordinance will now be in effect until the middle of December.