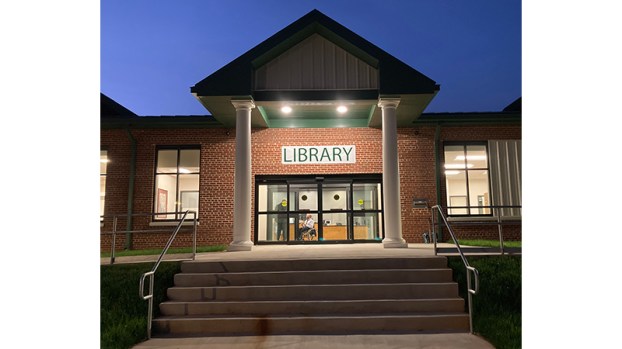 The old Dillwyn Primary School has received a $5 million renovation to change it into a new library and community center for the county. 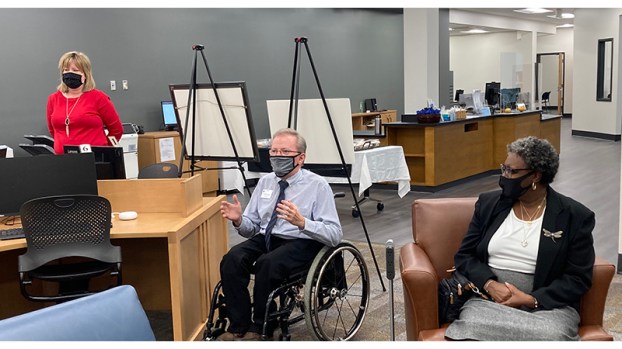 Central Virginia Regional Library Director Rick Ewing tells those gathered about how the new library came to be along with the features that differentiate it from the old Buckingham County library. 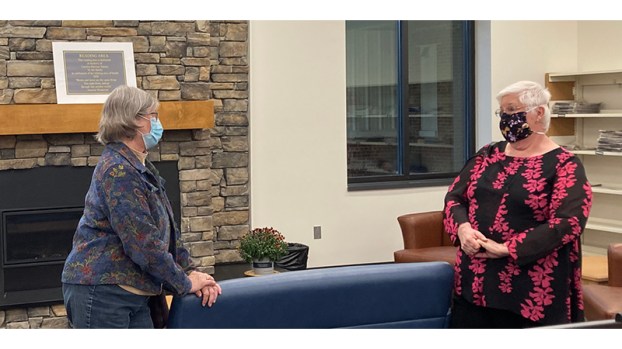 Susan Smith, left, and Vicky Page of the Central Virginia Library Regional Library Board talk in front of the fireplace, the centerpiece of the new library’s reading area.

What began as the dream of a group of Buckingham residents more than a dozen years ago has come to life with the opening of the new Buckingham Library this week.

The new 8,000 square foot library on Highway 15 in the old Dillwyn Primary School building officially opened Monday, Oct. 19. The new library has 25,000 items to check out and 20 computers for use along with a children’s section, teen area and group meeting rooms.

“We had a lot of information about what it would look like, but when you walk in the building and see it all, if we didn’t have a mask on, you could see a broad smile for sure,” Susan Smith of the Central Virginia Regional Library Board said at a special event previewing the finished library to members of the library board and Buckingham County Board of Supervisors Saturday, Oct. 18. “You can probably see it in our eyes anyway. It’s been a long time coming.”

One of the main features of the library is a large, inviting fireplace in a reading area that looks more like a family room than a public space. Convenient chairside electrical connections invite the visitor to pull out their laptop and get some work done while enjoying the fire.

“This is a gem for Buckingham County,” library board member Vicky Page said. “And as a sister coming from Farmville, we are glad to have a sister library of this stature.”

What began with potluck dinners and bake sales by the friends of the library working to fulfill a dream got a boost when the county agreed to renovate the school and fund the project for both the library and a community center. The new library is twice the size of the old library with almost three times as many computers.

“I’m really happy that it happened,” Central Virginia Library Director Rick Ewing told the group gathered at the preview. “This is the best location in Buckingham County for this sort of thing. Busy intersection, grocery store, restaurants, we are up on a hill, super athletic fields where you can see forever. There is no better place in Buckingham County.”

The Buckingham County Board of Supervisors was key in providing the funding for the $5 million project, $2 million for the library itself and $3 million for the attached community center.

“This is something that the county has needed for a long time, not just the library, but the facility next door is state-of-the-art for Buckingham County,” Board of Supervisors Vice Chairman Don Matthews said of the community center attached to the new library. “We are going to be able to get a lot of things involved in the community that we have never had before with this building over here.”

Matthews said being able to reuse the old Dillwyn Primary School saved the county money on building the structure, site plans and drainage in addition to giving an old building new life.

“The other savings is we killed two birds with one stone. We built a library, but we got a community center along with it,” Matthews said. “Those two things go hand in hand.”

Unfortunately, the library the board members toured Saturday evening is not the library Buckingham residents will experience if they visit during the pandemic. Ewing said the library staff would spend Sunday transforming the new space into a socially distanced environment before the new library opened to patrons Monday morning.

“Tomorrow (Sunday) a crew of us will come in and ruin it, which is pretty horrible,” Ewing said, explaining that he has dedicated his life to providing good service and making libraries a comfortable environment where people can come and spend all day if they want. “Now, we want people to come in and then leave as quickly as we can get them out.”

Computer time will be limited to an hour. A lot of the seating will go away. Some computers will be taken out. The toys and games in the new children’s area will not be there. The meeting room and small study room will be closed and the library will have no programming.

The number of people in the building overall will be limited to 20 people plus staff.

“That’s why we are trying to keep this somewhere between a soft opening and a big celebration,” Ewing said.

But once the pandemic passes, the library will return to its initial design and be ready to serve as a hub of information and resources for county residents.

“Every community in the country would love to have this library,” Ewing said. “So I think Buckingham County is very fortunate.”