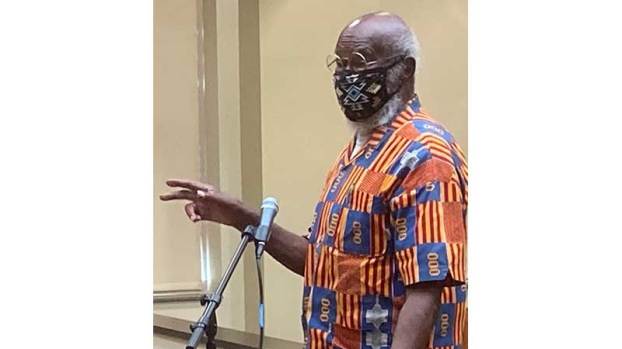 Rev. James Samuel Williams Jr., a resident of Farmville for nearly 87 years, said the town does not need any kind of physical symbol to the horrors of slavery. (Photo by Roger Watson)

The bronze soldier was hastily removed from atop its pedestal at the intersection of High and Randolph streets the night of June 18.

The Aug. 19 meeting was a called public hearing to discuss the future of the statue as required by a state law allowing local municipalities to remove or recontextualize Confederate statues in their boundaries.

There was shame cast at the council for the quick action taken in the midst of civil unrest and protests across the nation in the wake of the death of George Floyd while in police custody in Minneapolis.

There was also plenty of acclaim given to the board for keeping the town safe by removing the statue from the perch it had sat on for 120 years. There were also several Civil War history lessons provided in the process. Through it all, the board sat silently behind their masks, listening to the speakers in the room, callers on the phone as well as letters and emails about the issue, without making any statements of their own.

The board cannot take action until 30 days after the public hearing. The earliest council will likely address the issue will be at its Wednesday, Oct. 14, meeting.

“Please, please put our precious soldier back on the pedestal where he rightfully belongs,” Flora Bolt implored the board over a conference line.

Others were pleased the statue had been taken away and said the only place it should be seen again was Farmville’s Confederate Cemetery or a museum.

“I want to commend you on the brave and bold action you have taken in removing the statue, and I am hopeful that you continue that boldness by not putting it back and by also removing the base of the statue,” James Ghee told the board. Ghee was representing the Farmville branch of the NAACP. “We do not need any symbols or vestiges of those who fought against the American union and in favor of preserving slavery.”

The idea of moving the statue to the town’s Confederate Cemetery was a popular idea among those who spoke or sent in comments. The Civil War museum in Appomattox and Sailor’s Creek Battlefield State Park in Rice were also mentioned as possibilities where the statue could be placed.

James Early, a Farmville resident and descendant of Confederate Gen. Jubal Anderson Early, said that in addition to being a general and a lawyer, his ancestor was “a white supremacist, a coward and an abject failure as a general human being.

“The concept of heritage not hate is a false dichotomy and an insufficient reason to display and maintain monuments of people who would have 35% of our county’s residents be defined as property.”

Michael Christopher Lucas said he was upset that the statue was dismantled and stored away.

“Shame on you for doing what you did. It was wrong,” Lucas said. “We need to consider each other and be inclusive of our Confederate past along with everyone else’s.”

Others said watching the monument come down was a moment that moved the town forward.

“As somebody who was born here in 1978, one of the proudest moments that I have had as a resident of this town was the night that that statue was removed,” Nate Layne said. “In the space of 20 minutes, that lawn filled up with 50 people to watch it come down… We can remember our history, but we don’t have to memorialize the darkest parts of it.”

Ernest Toney said the council’s June decision to remove the statue stands in stark contrast to earlier decisions made by local government representatives half a century ago.

“I want to thank you for making a courageous decision to choose what is right and safe, knowing that it might be unpopular with some of your constituents,” Toney said. “Some 50 years ago elected officials in this town and county made a decision to cast a dark shadow on our community forever. I’m thankful that the council chose to be on the right side of history.”