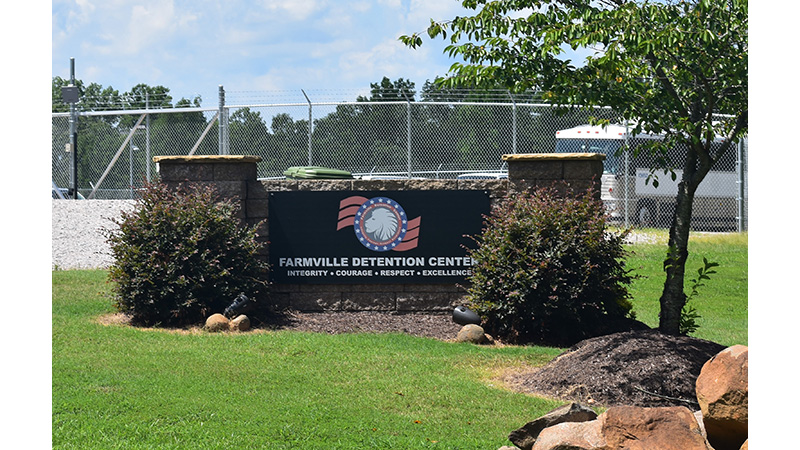 The ICA detention facility in Farmville where more than 90% of those held tested positive for the coronavirus last month.

The director of the Farmville Immigration Centers of America (ICA) Detention Center told the Farmville Town Council Wednesday, Aug. 12, the facility has not had any detainees or staff exhibit symptoms of COVID-19 since July 10 and claimed much of the stories in the media about problems with the treatment of detainees in the facility are not true.

Jeff Crawford appeared before the council in an effort to answer questions surrounding reported issues with a COVID-19 outbreak at the facility. More than 90% of the detainees of the facility and 28 staff members have tested positive for the virus.

“We had many positives of COVID-19, but there is a great difference in being positive for COVID-19 and being sick, and no one seems to be differentiating between the two,” Crawford said.

He said the center had no more than 10 detainees actively displaying symptoms of the virus at one time at the height of the outbreak. He said half of those who became ill had low-grade fevers, and only four or five detainees had serious symptoms that typically lasted only 24 to 48 hours.

“Much of what the news has been reporting the past two weeks was news that was over a month old to those of us who were in the facility before it came out in public,” Crawford said. “We understand the stories look terrible. We understand the circumstances were characterized by the media as dire. We understand the claims of the detainees on their face seem horrible, but I can tell you that I have been present at the facility through the entire ordeal, and it was not a dire situation.”

The Farmville facility is currently the subject of several lawsuits brought by detainees and other groups concerning their treatment at the facility. Tuesday, Aug. 11, U.S. District Judge Leonie Brinkema ordered a halt to any transfers of detainees into the facility, saying the outbreak was the result of a “bureaucratic circus.” She also said the track record for those running the facility was “not a good one.”

The Centers for Disease Control and Prevention had a team of inspectors at the Farmville facility last week conducting an inspection on the conditions and assessing the staff’s response to the outbreak. The plaintiffs in the lawsuit were ordered by the court to be included in a debriefing on the findings of the inspection scheduled for Friday, Aug. 14.

An anonymous detainee recently described conditions at the facility to the Richmond Times-Dispatch. The person said there were bugs in the food, and detainees had to clean up vomit and diarrhea without protective equipment. The four detainees who filed the lawsuit that resulted in transfers being shut down said there was incessant coughing without protective equipment, vomiting and fevers that limited sleep. The lawsuit said some detainees suffering serious symptoms of the virus were given only Tylenol.

Crawford discounted the allegations as untrue before the town council Wednesday night.

Crawford said he is ready to defend the facility and its response to the COVID-19 crisis.

“I can tell you that I have absolutely zero concerns about our ability to refute those allegations in court,” he said. “We strongly refute the allegations of the detainees. We have filed our own rebuttals in court under oath. Unfortunately, most news media outlets will not print or report our position.”

Council member Greg Cole, who works as the CEO of The Woodland retirement community, told Crawford the lack of communication about the outbreak had unnecessarily placed the Farmville community in danger.

“One thing you have failed to do is to provide good communication to the community,” Cole said. “I run a retirement community, and I have a population that is the most vulnerable for this disease, and now you are telling me this news came out and it happened six weeks ago?

“Your lack of communication put this community and the vulnerable people in this community at risk, with your employees, 28 of them, that have tested positive that are coming back out into our community with no knowledge whatsoever from the community until it’s almost an afterthought. You need to do a better job, particularly as a subcontractor for this town, to have the best interest of the town and its community in mind when you make decisions.”

Crawford said his communication was restrained by the federal government but said all cases at the facility were reported to the Virginia Department of Health.

The outbreak at the facility was reportedly caused by a transfer of detainees from Arizona and Florida on June 2. Crawford said he told U.S. Immigration and Customs Enforcement (ICE) on Wednesday, April 1 in writing that he recommended no detainees be transferred in or out of the Farmville facility.

“They denied that and continued to bring us people all the way through sometime in May,” Crawford said.

He said there was a lull in transfers until the June 2 transfer that was ordered by ICE headquarters.

“I do know that the local field office pushed back and attempted to refuse the transfer, and they were overridden by officials in Washington, which is how we received the transfer that we did,” Crawford said.

The beginning of an adventure