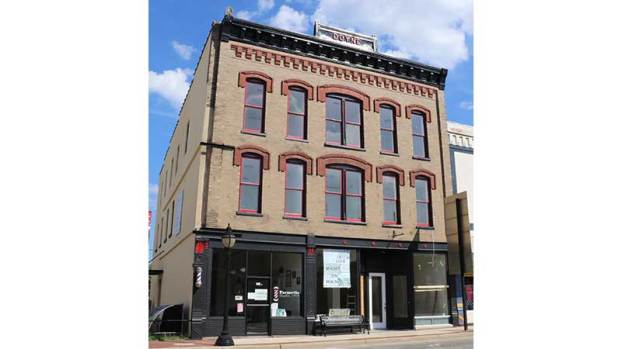 Above the downtown barber shop, the Doyne Building at the corner of Main and Third has been renovated for three-bedroom apartments. (Photo by Titus Mohler)

New apartments give view of town

The iconic Doyne Building located in downtown Farmville at the intersection of West Third and Main streets that was once adorned by a mural highlighting Farmville as “America’s First Two-College Town” has now been turned into apartments and retail spaces.

Owner Joe Fowkes said an open house is set for July 29 for citizens to tour the building, now known as Doyne Lofts.

Known as the Doyne Building because it was once home to the Doyne family that used it for a funeral service business, the property was sold to new owners Joe and Leigh Fowkes and Chris Corcoran in September 2018.

According to Joe Fowkes, the new space has four 1,500-square-foot three-bedroom two-bath apartments that will give residents a view of downtown Farmville.

There are also four commercial spaces at street level.

The owners purchased the building to complete the historic renovation and preserve the significant structure that has been a cornerstone in Farmville since 1890, according to Joe Fowkes.

The mural depicting “America’s First Two-College Town” had to be removed because the project was labeled historic preservation.

“Because this is a historic preservation project, we are working in conjunction with the Department of Historic Resources (DHR), which maintains rules for such projects on a state and federal level,” Joe Fowkes said.

According to Joe Fowkes, DHR determined the mural on the building was not within the historic guidelines. They were told it could not remain on the building.

“We have always enjoyed seeing the mural as we enter downtown and its celebration of Farmville as a university town,” Joe Fowkes explained. “We hope to incorporate a banner in keeping with the mural.”

Immigration Centers of America (ICA) Farmville employees have joined the ranks of other Virginia detention facility workers who have tested... read more