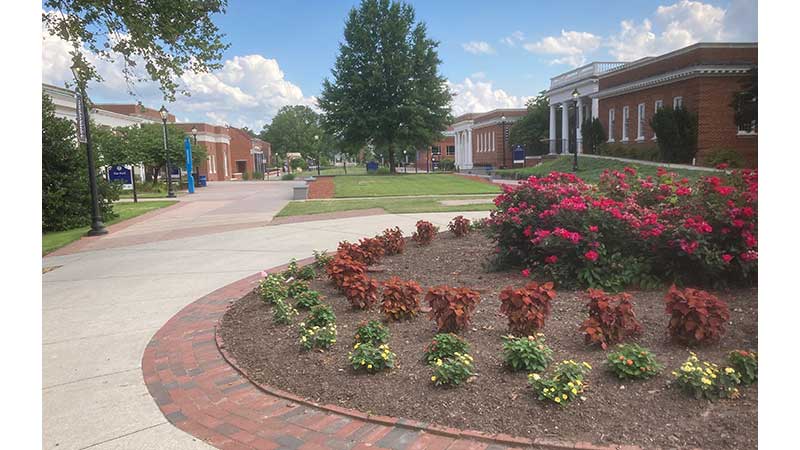 The Longwood campus has been a lonely place this spring where the spring flowers have largely been unappreciated by students who were forced to abandon campus and continue their studies online due to the COVID-19 pandemic. (Photo by Roger Watson)

Since shutting down the campus and sending students home shortly after spring break in mid-March, Longwood University has had a campus in the middle of Farmville that has felt expectant.

Like a beautifully decorated hotel ballroom awaiting a fancy dinner party, the deserted quad seems to beckon life, but only the whirl of the air conditioners on the roofs of buildings surrounding the campus green space can be heard on a bright sunny day when students should have been coming and going, working to finish up semesters, wrap up degrees and launch into a world confident of a bright tomorrow.

Instead, the campus is more like a ghost town, with curious squirrels outnumbering students on this bright, spring day. The residence halls, classrooms, dining areas and athletic fields sit deserted. Millions of dollars of infrastructure were suddenly turned into a health liability by a virus that made its way to Farmville from China or Europe or parts unknown. One of the town’s biggest economic engines sits oddly idle.

A similar scene plays out just down the road at Hampden-Sydney College. Its more than 1,000 students were also sent home to safety to continue studies online, leaving its historic campus devoid of student life in the spring, an odd situation for the 245-year-old campus.

As spring has turned to summer, thoughts of what will come in the fall have begun. Plans are being made to return students to campus, but also to a very different type of college life.

“More courses will be taught in an online or hybrid manner. Classes will be smaller. Schedules will be staggered. Residence life will be spread out,” Blake said.  “Food service will be offered in non-traditional ways and large-scale events such as performing arts and athletics will be a new experience.”

Longwood President W. Taylor Reveley IV and his team at Longwood are working to map out the new normal that will give the dormant campus a spark of life again beginning Augusta 24.

Reveley said some courses will be a hybrid of in person and online and some will be online only.

“That would be true of any semester under any circumstances,” Reveley said of the online courses. “But the firm intent is to work with the state very closely to put these safeguards in place and then have in-person learning like we’ve had in Farmville lo’ these many years, again in the fall.”

The same is true at Southside Virginia Community College, where President Quentin Johnson is working with his own team to get students back to class in some form this fall.

“It’s my anticipation that they’ll be a combination of modalities,” Johnson said. “We will continue to have significant online instruction.”

He said programs like nursing and welding that require face-to-face instruction will occur in the classroom with new guidelines for safety precautions to keep faculty and students safe.

Of all the businesses that have been disrupted by the pandemic, higher education is one that has been most affected because of the sudden change to the business model to be almost identical to the model of competitors colleges have spent much energy marketing against.

Pre-pandemic, one of the biggest threats to traditional brick-and-mortar universities was private, online-only competitors who offered students the opportunity to earn degrees from their bed in their pajamas for much less than the cost of traditional college experiences.

Suddenly this past spring,  every university In America was forced to go to the model they had been preaching against for years, with students finishing the spring semester online sometimes from their bed and in their pajamas. Except, the traditional universities did not have the advantage of having constructed an online infrastructure over time to manage the sudden change.

“It was really hard,” Reveley said of Longwood’s quick transition to an online learning platform. “The faculty, in particular, were at that point, and have been since, really remarkable in making the really hard transition as smoothly as we could. Students, likewise, were really remarkable. Honestly, how they comported themselves in the face of these unprecedented circumstances and the hard work they did through the spring.”

The fear for many in higher education was students would enjoy the flexibility of online learning and leave brick and mortar universities behind once the pandemic is over. Reveley said he expects to see a different effect from forcing students to experience online learning for a semester.

He said his counter intuitive sense tells him this could actually work out well for in-person learning schools in the long term. He said the experience of online classes in high school and college for this generation of students has not been one that would cause them to eschew university learning. In fact, now they may embrace it more.

“No one across the country feels like that’s (online learning) been a resounding triumph and a resounding appeal as compared to learning in person, and so it’s actually possible a strange effect of COVID-19 and the lockdown is going to be that the rising generation in fact, has that much more of an appetite for in-person learning, and all the virtues of being on campus, as compared to online education. I think that’s possible.”

But to get to that brighter tomorrow, the university and the state university system has to overcome some financial issues caused by the pandemic.

Public universities in Virginia are expecting a state budget cut after a 20% drop in state revenues due to the economic shutdown associated with the COVID-19 lockdown. There is also the question of what student populations are going to look like the next several years. There is the problem of affordability with parents being out of work. Financial aid reductions have also been discussed as a factor in keeping students out of the classroom.

And without a treatment or a vaccine for COVID-19, the health factors when students return in the fall will be just as real as when they left in mid-March. The uncertainty has some students considering taking a gap year or spending some time satisfying general education requirements in the community colleges before transferring to a university.

Southside Virginia Community College President Quentin Johnson said he has heard some talk of that in light of parents concerned about safety of living away from home.

“There are some students, as I understand it, and some parents who may be thinking about staying home and maybe taking a look at community college,” Johnson said. “I don’t wish any of our university partners to have difficulties with challenges like that, but you know we’re here and we believe that we’ve got a product that’s affordable, accessible, we have academic rigor and are accredited by the same organizations that four-year institutions are.”

Johnson said students who need to work and go to school or take a timeout for a year may find the community college system to be a good alternative.

Although there is more uncertainty in the incoming college population this year than in past years due to a variety of circumstances around health safety and economic factors, Reveley said it appears Longwood’s population is fairly committed to being there when the school reopens August 24.

“We haven’t heard a lot of discussion about gap years or about community colleges among Longwood students,” he said. “I think it is just the overarching financial uncertainty itself that’s really weighing on families and students.”

Reveley said he believes Longwood is going to come out of this crisis stronger than before. He listed the other turbulent times in Longwood’s history including some of the last fighting of the Civil War happening on Longwood’s doorstep, two World Wars  and the beginning of the Civil Rights movement at R.R. Moton High School.

“On the other side of all this, the zeal is going to be that much greater for a beautiful campus. The mentoring that occurs when you really know your professor and your professor really knows you,” Reveley said. “We’re a school where the classroom is a sacred space. I think that is going to make us stronger.”