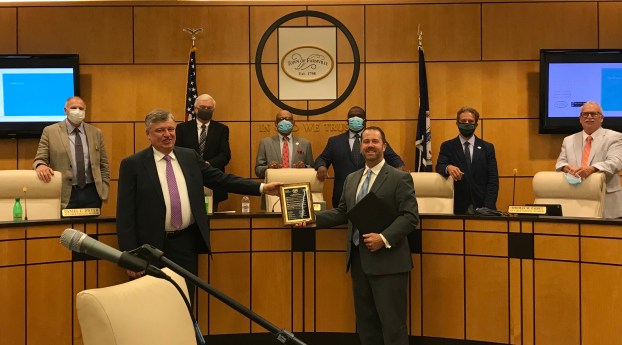 Farmville Mayor David Whitus, left presents outgoing councilman Jamie Davis with a resolution honoring him for his time on the Farmville Town Council.

Davis honored for his time on town council

Davis, who announced in February that he would not seek reelection, citing wanting to spend more time with his family, said he is not ruling out public office altogether but says, “Now is a necessary ending to a rewarding eight years of service.”

“In 2012, when I was first elected, my children were 3 and 6 years old. I wanted to help shape the direction of our community in ways that would contribute to making Farmville a better place to live, conduct business, and to raise families,” Davis said. “My boys are now 11 and 14. While I am involved in many of their activities, I am looking forward to having more time with them.”

When it comes to serving on the council, Davis says he enjoyed working with the mayor and council to make progress happen and always felt he could express his thoughts.

During his time on council Davis served as chairman of the finance and ordinance committee.

According to Davis, since 2012, the town has reduced its general obligation debt by more than $9 million, from $19 million to $9.8 million while taking on no additional debt.

“We have been able to pay for big-ticket items and improvements without having to finance them,” Davis said.

Although the pandemic has brought hardships for many, one group of furry friends has seen a bright side to the... read more