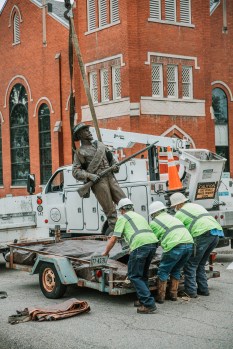 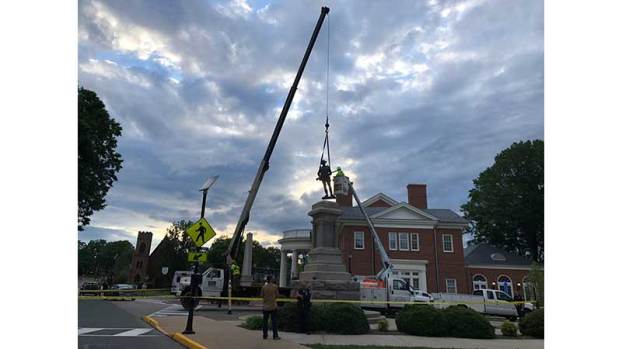 The Confederate solider statue on High Street in Farmville is removed from its pedestal Thursday evening, June 18, shortly after the Town Council voted unanimously to have it removed. (Photo by Alexa Massey) 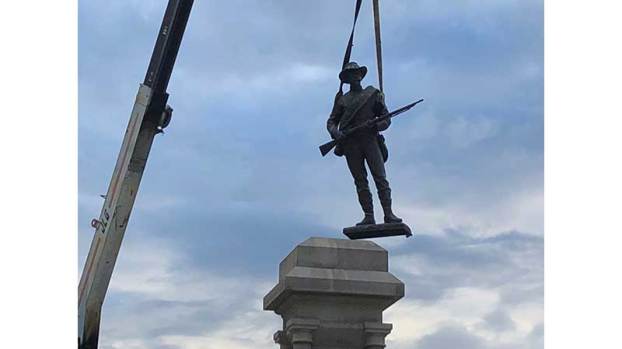 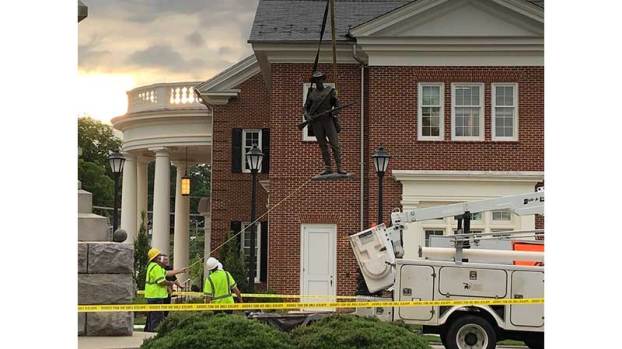 The Confederate soldier figure is moved by crane to a waiting truck for transport Thursday evening, June 18, in Farmville. (Photo by Alexa Massey) 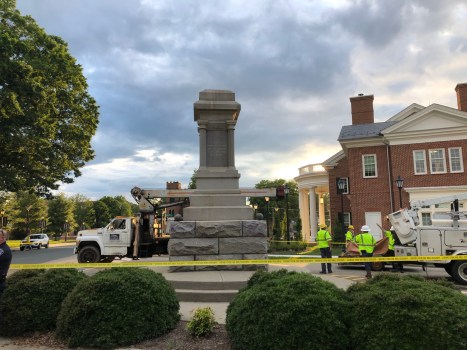 The empty pedestal remains for now at the location at the intersection of High and Randolph streets in Farmville. (Photo by Alexa Massey)

Farmville’s Confederate soldier statue was taken down from its pedestal on High Street Thursday evening, June 18.

The Farmville Town Council voted unanimously at its continued council meeting Thursday to remove the Confederate statue located at the intersection of High and Randolph streets, according to a Thursday evening press release from the Town of Farmville. The continued meeting was scheduled to begin at 7 p.m. The removal of the statue with a crane was underway by 7:30 p.m.

Police officers, town council members and a crowd of around 50 onlookers, who happened upon a moment of Farmville’s history, stood by as a crane lowered the bronze Confederate soldier figure to a waiting truck, leaving an empty granite pedestal.

The release from the town stated council members expressed concerns centered around public safety of individuals and property during this period.

“The statue will be secured off-site and preserved until further conversation with various community groups and the citizens of Farmville about its relocation and the appropriate disposition of the monument base,” officials stated in the release.

The seven-foot-tall bronze soldier at the top of the 19-foot pedestal made of Virginia gray granite was the only part of the monument taken away on a truck.

The release concluded by noting Farmville is a unique community, and the council determined this was the best course of action at this historic time in America.

The statue was put into place in October of 1900 by Confederate Veterans and Daughters of the Confederacy at a cost of $3,000. The property in front of the Farmville United Methodist Church and across from Longwood University is owned by the town.