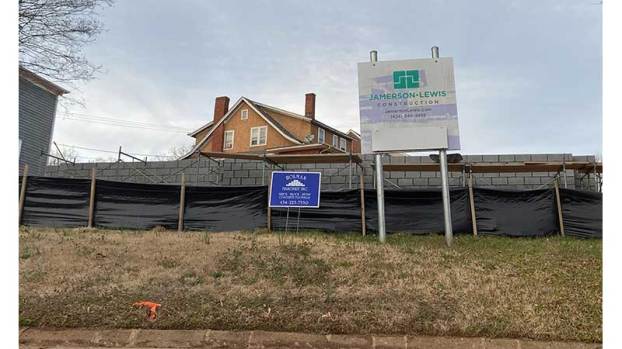 Construction and renovations have begun on three structures on High Street that will provide housing opportunities.

After nearly three years of seeking permits, construction and renovations are in the beginning stages for three structures on High Street that will provide housing opportunities.

The Farmville Town Council voted in the fall of 2019 to approve three Conditional Use Permits (CUP) for owners Robert and Sherry Martin.

The first CUP request was to renovate an existing single-family structure into a multiple-family dwelling consisting of three dwelling units, with each having no more than three bedrooms on 504 High Street.

The second is for the Martins to construct a multiple-family dwelling on an existing vacant lot consisting of three dwelling units with each having no more than three bedrooms.

The third is for the renovation of an existing single-family structure on 510 High Street into a multiple-family dwelling consisting of three units, with each having no more than three bedrooms.

This is the third time the Martins have sought permits from the town to renovate and or construct a dwelling.

In September of 2017, the Planning Commission heard public comments on a rezoning request proposed by the Martins that would have provided a zoning classification to build a structure to house 195 students on the corner of High Street and Appomattox Street.

That project met objection when 27 people spoke against the permits during a planning commission public hearing — citing quality-of-life issues, noise, the historic nature of the area, parking, trash, traffic, the precedent the rezoning could set and density levels.

Based on public comments and conversations with the Martins and their developer, they rescinded the request.

In April of 2018, the Planning Commission held a public hearing at the request of the Martins regarding a CUP under the current zoning, R-3 District, to demolish the existing dwellings and construct a new structure that would have 10 dwellings units with each dwelling unit housing three people.

The primary concerns from the public hearing comments were tied to preserving the existing houses that the citizens considered to be historical, the need for more student housing, whether the structure being considered was truly one structure, and parking for guests. The planning commission recommended to town council that they deny the request because the project did not fit the historic nature of the neighborhood and would have a significant detrimental impact to surrounding property owners.

Adam Yoelinn, who lives adjacent to the Martin’s renovations and construction, said he is in support of the new project.

The Herald reached out to property consultants and contractors with Jamerson-Lewis Construction for more details as to when construction is expected to be completed but have not received a response.

Family: the past meets the present