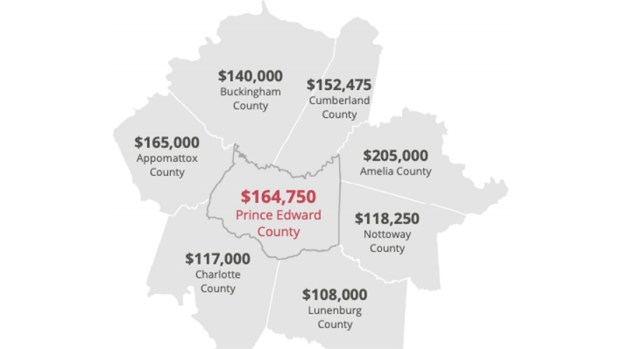 Prince Edward County had the third highest average home purchase price in 2018 among its surrounding localities.

With the help of a $30,000 Virginia Housing Development Authority (VHDA) grant, the Prince Edward Affordable Housing Coalition has been able to gain a better insight as to the housing needs in the county and the Town of Farmville.

The Prince Edward Affordable Housing Coalition hired HDAdvisors (HDA) to conduct a housing study and prepare a report that was recently released.

“This study confirms what we suspected,” Farmville Mayor David Whitus said. “There is a shortage of housing all across the board for those with low-, medium-, and high-income levels.”

Average home prices in the area necessitate an annual salary of $42,000 (for ownership) or $31,800 for rental according to the study.

“On our minds was the various housing needs in the area, particularly for those whose income levels made stable, decent housing a tremendous challenge,” Rabon said. “We also wanted to discuss the need for key stakeholders to come together to address local housing needs.

“The purpose of this group is to improve quality, affordable housing across all sectors of our community,” Rabon said. “This includes new professors at the colleges, first-year teachers at the local schools, service industry workers, those living on Social Security and supplemental income, etc.”

As the designated community action agency for Prince Edward County and recognizing that housing is one of the most significant barriers for individuals seeking a path out of poverty, STEPS President and CEO Sharon Harrup said STEPS agreed to lead the coalition’s work.

“It is important for the community to recognize we are targeting housing for all income levels,” Harrup said. “We are not talking about 100% housing for people currently living in poverty, and neither are we talking about the future development of homes over $350,000. We need options in this area, at all price points. Choice is always preferable.”

According to the study by HDA, the area has many positive economic indicators in its favor. Population growth by 2030 is projected to be 8.7%, and three of the five largest employers in the region (Longwood University, Centra and Walmart) are in Prince Edward County.

The four strongest industries in the study area are health care, government, retail and hospitality/food service.

These four industries comprise more than 70% of the county’s employment. Twelve of the 15 top growth occupations for the region are in healthcare, with a median annual salary of $35,647.

The housing study also showed the following that new residential building permits are almost exclusively for single-family housing at the higher end of the market. Such constraints on supply create rising prices at all income levels.

There will be a new demand for 48 households per year on average over the next two decades.

Median rents are out of reach for 2,489 households in the study area, but there are only 240 subsidized housing units. There is a need for 435 additional rental units at or below 50% of Area Median Income (AMI). An affordable rent for a two-bedroom home at 50% of AMI is $632. For a one-bedroom, it is $527.

As housing costs continue to increase faster than income, a growing share of working-age households will find themselves severely cost-burdened.

Higher-end apartments are also in demand.

Given the number of households at the higher income level, there also appears to be a deficit of rental units at 100% of AMI or higher. That translates to new rental units at $985 to $1,125 for a one-bedroom.

Households age 65 years and older will be the fastest-growing demographic in the coming decades.

“Housing that meets the needs and budget of this population should be a major focus. Housing quality and quantity for rural seniors will require urgent attention,” the study stated.

According to Rabon, now that the study is complete, the housing coalition is working on a strategic plan and will be submitting a grant for that work.

“The group is also assessing what the most effective way to organize the group moving forward is,” Rabon said.

The Town of Farmville Comprehensive Plan is currently undergoing an update to be released in this spring. Through a series of community input sessions and surveys, the town has identified housing as a key priority for the future plan.

According to Farmville Town Manager Dr. Scott Davis, the town intends to prioritize a wide variety of housing types for the future of Farmville.

The month of February is set aside in the United States to celebrate achievements by African Americans and their central... read more