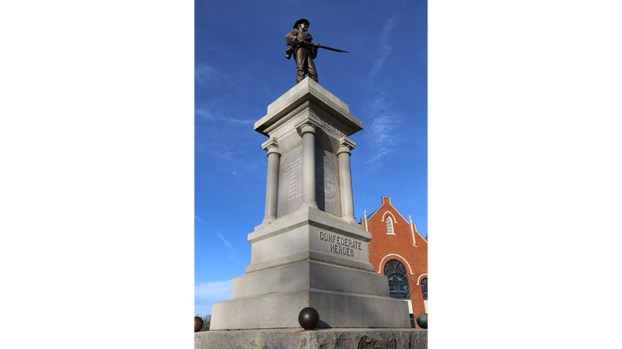 Farmville’s Confederate Heroes statue on High Street has been there since the early 1900s. It has come under question after a new state law allows localities to remove statues and monuments. (Photo by Titus Mohler.)

A new state law soon to be signed by Gov. Ralph Northam would give local governments control over what to do with the Confederate statues and memorials in their jurisdictions. That has some asking if Farmville’s Confederate soldier memorial on High Street should stay or go.

An open letter to Mayor David Whitus in the Wednesday, March 11, edition of The Herald from Taylor Harris, a Halifax resident, implored the mayor to keep the statue standing guard where it has been since the early 20th century.

“Removing this monument from Farmville would be like removing a part of history,” Harris wrote. “The history is important. It shouldn’t be ignored or pushed under the rug. It’s part of what got us to where we are today.”

The entire letter can be read at www.FarmvilleHerald.com.

When recently asked about the new law and what action, if any, the town may take, Whitus was non-committal.

“We have been monitoring the current legislation that grants localities the ability to relocate them,” Whitus said. “Once a final version is passed, the town will evaluate its options. One consideration is appointing a commission to evaluate options, receive community input and offer guidance to council. I am confident our community can coalesce around this issue and be the model for other communities.”

The final version of the law passed last week after a conference committee hashed out different versions of the House and Senate bills. The compromise bill says the municipality must hold a public hearing on any statue in question. The locality also must offer the monument to any museum, historical society, government or military battlefield before being taken down.

The issue had not come up for the council before because state law has prohibited the removal of Confederate statues or memorials. This has been a source of contention for the Charlottesville City Council over its vote to remove a statue of Robert E. Lee from a public park.

Farmville’s Confederate Heroes statue stands between the Methodist and Episcopal churches on High Street, directly across the street from the Longwood University campus.

Northam made his feelings clear on the legislation when he tweeted a one-word response to a story on Twitter about the new law from The Virginian-Pilot. “Good.”