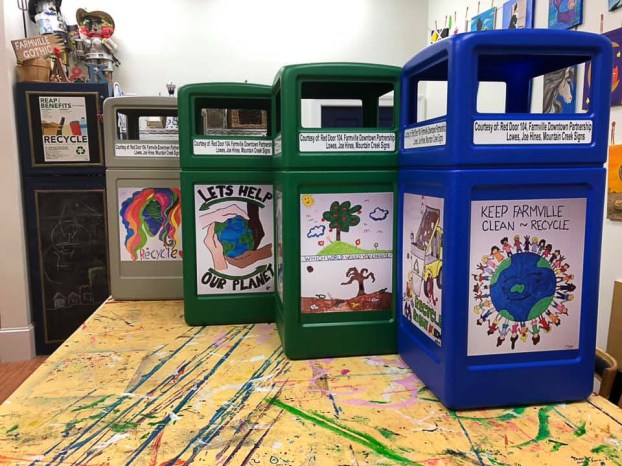 Art students at Red Door 104, LLC recently completed artwork on recycling bins that will be placed around the downtown area.

SOUP is an event that allows citizens the opportunity to listen to proposals from fellow citizens seeking grant money that would allow them to bring their ideas to reality. The winner is chosen by popular vote.

Sullivan was chosen as the first-place winner for her Go Green proposal.

According to Sullivan, she received a $1,000 grant from SOUP and citizen Joe Hines offered to pay for the artwork that has been placed on the sides of the recycle bins.

“People asked if I would put artwork on the bins, which I did but chose to use my students as I felt that kid art would be more interesting,” Sullivan said. “Joe offered to pay for the artwork as he felt this was a worthwhile project for the community and wanted to be a part of it. That cost was $1,000, bringing the total cost of the project to $2,000.”

Sullivan says there are four bins with 16 pieces of art from her students who range in ages from 8 to 14.

“Over the course of several months, the children created their works of art in the studio and once they were complete, Anthony DiMarco, owner of Mountain Creek Signs, photographed the pieces and printed the art onto vinyl, which was then applied to the side panels,” Sullivan said.

Grant funds originally only covered the cost of three bins, but with the help of Lowe’s of Farmville, Sullivan was able to get a fourth recycling bin.

“I am a huge advocate of recycling and hope that our community will embrace the bins and start a trend of recycling in our community,” Sullivan said. “We also create and contribute the bottle cap murals you see around town as another way of reducing our footprint. We hope that doing what we do in an artistic way will open people up to recycling and repurposing in a way they might not have before.”

Now that the recycling bins are complete, they will be placed by the High Bridge entrance/LOVE sign, by the public restrooms at the downtown plaza, one in front of Barnes and Noble on Main Street and one by Crute Stage.

Chorale to present ‘From Fauré to Frost’