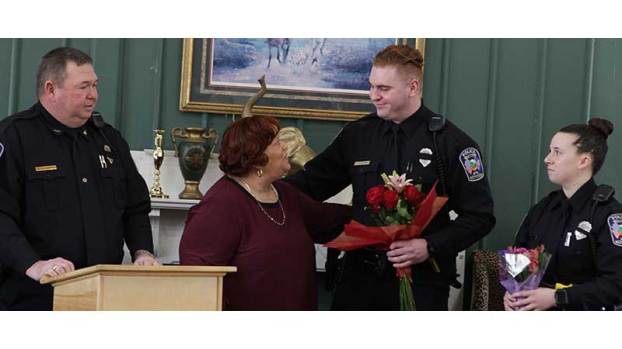 Farmville Police Department Chief A.Q. “Andy” Ellington and officers Dalton Foley and Olivia Martin were reunited with Sherby Lee, who they rescued from a burning car in November. Pictured are, from left, Ellington, Lee, Foley and Martin. (Photo by Crystal Vandegrift / Herald)

Woman meets officers who saved her

The two officers who are credited for saving the life of a woman from a burning vehicle were reunited with her during a reception Tuesday, Jan. 28, at the Farmville Train Station.

“Officer Foley never broke stride and continued to approach the burning vehicle cautiously,” Farmville Police Chief A.Q. “Andy” Ellington said. “Opening the door, he discovered an individual trapped inside the vehicle. He quickly cut the seat belt and began moving the woman from the vehicle.”

Only seconds later, Officer Martin arrived on the scene and immediately ran to the passenger door to check for other occupants. Finding none, she quickly ran to the driver’s side of the vehicle and assisted officer Foley in moving the woman to a safer distance from the burning vehicle.

Sherby Lee, 57, was the only person in the vehicle and suffered a medical emergency causing the vehicle she was driving to crash.

During the reception, Lee tearfully thanked the officers and all law enforcement and rescue personnel who were working that eventful night.

“I am truly blessed and thankful,” she said. “I thank everyone that took part in saving my life. I’m blessed to be here.”

Lee further said that she did not remember much from the accident.

Lee says she only received a small scar on her hand from the accident.

“I know for a fact that you were only seconds away from losing your life that night,” Chief Ellington said.

In addition to officers Martin and Foley, Chief Ellington recognized and thanked the police department’s emergency dispatchers who were working the night of the accident.

“They took the initial call, and within seconds they put it in the right hands,” Ellington said. “It takes a smart person, a dedicated person, and a loving person to work this thankless job.”

The heroic rescue of Lee by officers Foley and Martin made the national news days following the accident with live police bodycam footage provided by the Farmville Police Department.