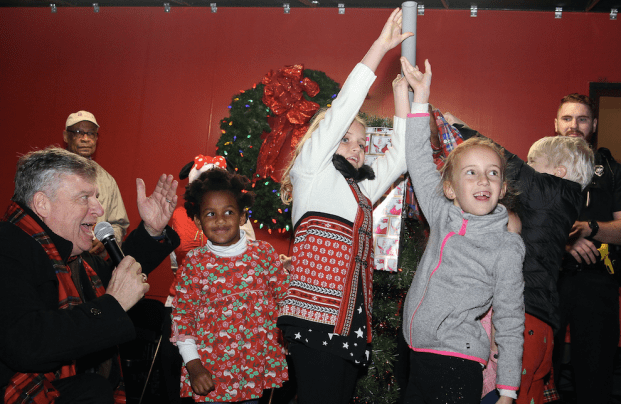 Pictured are, from left, Farmville Mayor David Whitus receives help from Laura Lee Aldrich, May Reveley, Aliza Pope and Quint Reveley in lighting the Farmville Christmas tree during the annual event held on Friday, Nov. 22 at the Downtown Plaza.

A large crowd enjoyed the annual Farmville Christmas tree lighting ceremony hosted by Farmville Downtown Partnership and the Town of Farmville on Friday, Nov. 22, at the Downtown Plaza. 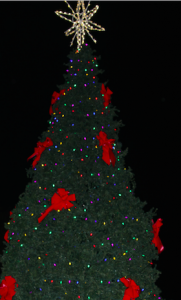 The Farmville Christmas tree
was donated to the town by
Longwood University.

During the event music was provided by the Prince Edward County, Cumberland County and Fuqua School bands and children could write letters to Santa and place them in the mailbox to Mr. Claus. The Prince Edward Christmas Mother was also on hand selling teddy bears for $10 each.

Hot Chocolate, cider and cookies where provided by Aramark Dining for all to enjoy.

During the event Farmville Mayor, David Whitus recognized and thanked police officers Olivia Martin and Dalton Foley, whose bodycam footage of their rescue of a citizen from a burning car last week has gone viral. “As we entered this season of Thanksgiving, we all have a lot to be thankful for,” said Whitus.

Whitus also noted that the event was special for another reason, “For a number of years, I attended a tree lighting in another town. And I always said, why can’t Farmville do this? So, five years ago, we started what I hope will always be an annual tradition for the town of Farmville, and that is our annual tree lighting,” he said.

According to Whitus, because the town tree that was donated by Longwood University has been used for the past few years and has become weathered, it will be retired after this holiday season.

“We are truly blessed by our friends at Longwood University, who gave us the tree that adorned the rotunda for many, many years. And so, for the last five years, that tree has been the town of Farmville tree, and tonight will be the final lighting of that tree because it has stood in the weather for the last five years.” Whitus explained to the crowd.