Detective Sergeant David Ragland has been named the Farmville Police Department Officer of the Year. 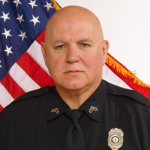 A nomination for Officer of the Year does not come to an officer by default. It is not bestowed by accident nor does a coin flip decide.

The nomination is voted on by an officer’s Command Staff. The Chief of Police usually submits the nominations in writing. The officers that are nominated represent the highest degree of character and are instilled not only with a solid sense of right and wrong, but with a sense of perseverance that will not allow them to stop. The officer must exhibit a desire for community service, involvement, and commitment to an agency. His command staff may nominate an officer that consistently performs at a level of excellence or exceeds normal expectations. This year, Ragland performed at that level.

According to his Chief, Andy Ellington, “Ragland has the aggressiveness and tenacity to be a police officer. “For example — a victim reported a sexual assault that had occurred several months before. “I know how hard they can be,” Chief Ellington explained, “when the recording is just played, let alone when everything, all of your physical evidence is gone because too many months had gone by.” Detective Ragland would not be deterred.

According to Chief Ellington Ragland applied for two search warrants, executed them at the dwelling of her accused and as a result had probable cause to execute a third search warrant.

With the third warrant he was able to search the inside of the suspects house recover a missing button– missing from the blouse of the woman that had been sexually assaulted. In addition, he arrested three others for drug crimes. Ragland also seized evidence of a previously committed financial crime. Most importantly, however, were the two arrests for rape he had secured. He took the confession of a third for a similar crime.