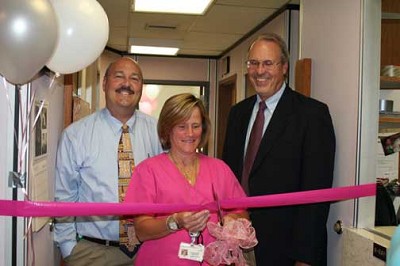 Offering high quality images, the unit will greatly enhance the early detection of breast cancers. Moreover, the digital images can be electronically transmitted to the University of Virginia Medical Center where they can be read and interpreted by its radiologists.

The ribbon cutting ceremony coincided with National Community Health Center Week, a weeklong campaign to raise awareness about the mission and accomplishments of the nation's community health centers.

CVCHC's new mammography unit replaces an older film unit that was donated to the center approximately 13 years ago by the Siemens Corporation through the efforts of then First Lady Susan Allen.

According to Debbie Smith, mammographer at CVCHC, thus far, 210 patients have received mammograms via the new digital unit.

Much of the funding for the new unit was covered by a grant of approximately $3.5 million received through the Patient Protection and Affordable Care Act for a renovation and expansion project at CVCHC, explained Manifold.

He added that community fundraising efforts also helped generate money that went toward the unit's purchase.

“We want to put a greater emphasis on women's health in general,” said Manifold. “So this helps by highlighting that on the front end of the initiative.” He added, “And, it was time for the old machine to go.”

Manifold offered, “The whole issue of breast health is enhanced by having the unit right here in this community.”

He prided, “This becomes the latest and greatest, as far as I am concerned, for how we provide that service.” Manifold added that last year, the center's x-ray department upgraded to a new system that offers digital diagnostic capabilities that are also linked to UVA.

To accommodate the new mammography unit, the mammography suite was one of the first areas renovated, said Manifold as he stood at the entrance to the suite. “This room here is the way the whole building will look when we are finished-all of the 1973 and 76 portions of the building will be renovated,” he explained.

The phased renovation includes expanding the waiting room and administrative areas, updating exam rooms, and the addition of a larger pharmacy.

“We are also adding a fitness and wellness center that will be named for Beulah Wiley, our founder,” stated Manifold.

He explained the fitness and wellness center will include an area for nutrition with cooking potential and a large group meeting space.

“There will be a work-out area for fitness classes and yoga. And there will be exercise equipment and machines,” added Manifold.

“We also have a new walking and jogging track outside,” he shared, noting that the paved area includes a half-mile and quarter-mile track. In the near future, fitness stations will be added. “But the track itself is ready for use,”

According to the executive director, the entire project should be completed by the fall of 2012.

“We also have 13 other sites that many people in this community don't even know about,” shared Manifold. “They are spread all over a very wide-ranging area that we call Central Virginia-running from Charlottesville and Albemarle all the way over to the Northern Neck and Westmoreland County to Fredericksburg…and all the way south to Brunswick County.

During his opening remarks, Manifold remembered Mary Leland, who served on the CVCHC board for 28 years.

He shared, “I would say that the last five or six years of Mary's life she was beating the drum for this new machine to be brought in here and now it has been.”

While offering his appreciation to staff and board members, Manifold stated, “I also want to thank the Health Resources and Services Administration, of the Department of Health and Human Services, and you the taxpayer for making this possible.”

He added, “The money you pay in taxes that goes to help this health center exist is very important. It is how we got the machine and it is how we are going to finish this $3.5 million project.”

Continuing, Manifold stated, “We also want to thank BAMA Works, which gave us a grant about two years ago.” He explained that BAMA is a foundation of the Dave Matthews Band.

He shared that Susan Allen, wife of then Governor George Allen, was the honorary chair of the American Cancer Society's Breast Cancer Prevention initiative. Subsequently, when Siemens donated the unit, the First Lady wanted it placed in a rural, under-served setting.

In turn, with the help of Dr. Ellen Shaw de Paredes, who was with Virginia Commonwealth University at that time, CVCHC's mammography program began, said Bashore.

“We actually do about 1,000 a year, now,” he stated. “But with the new unit, we hope to be expanding those services.”

Bashore shared, “Also, with the expansion and the renovations that we are doing, we want to be making changes in the way we work with patients and make a bigger emphasis on healthy lifestyles with a nutrition center, fitness center, and working more on a holistic approach with our patients.”

“That's been a wonderful program over the years and we want to thank Pfizer for all their help,” stated Bashore. “They have been a great partner with all the health centers and we'd like to recognize them as one of the sponsors of National Community Health Center Week.”

He continued, “What it means to me as a physician is the ability to have the medicines that are most needed made available, based on our screening programs on income level and lack of insurance.”

Bashore added, “They are medicines for blood pressure, cholesterol, diabetes-some of the most important diseases that we deal with on a regular basis. And also cardio vascular disease and stroke.”

The medical director shared, “A program like that has been extremely useful over the years for us and they have been very, very generous.”

Rossi offered that this year marks the 18th year of the partnership between Pfizer and America's community health centers, which she said continue to deliver valuable resources to those who need them most.

She shared, “The level of dedication that is exhibited by this center's staff as health care professionals and volunteers is without equal.”

On behalf of Pfizer, Rossi recognized Congressman Robert Hurt for “his continued voice in Washington, D. C., and for raising awareness about the valuable resources provided by community health centers in Virginia.”

According to Rossi, this year's theme, Serving Locally-Leading Nationally, is a testament to the nation's community health centers, which she said remain a crucial link in the health care services system and offer help to patients in need.

Sharing the Care is part of its Helpful Answers, Pfizer's family of patient assistance programs for both the uninsured and the underinsured, explained Rossi.

“Our Sharing the Care partnership here has been particularly rewarding,” she stated. “In fact, just this year alone, Central Virginia Community Health Center has distributed more than 1,700 free Pfizer medicines to more than 1,300 patients at a cost savings of more than $420,000.”

She continued, “Pfizer has long been committed to helping underserved patients get access to their medicines. We hope that everyone here today will spread the word about Pfizer's Helpful Answers. It's easy to sign-up and get help.”

Rossi offered, “Patients who are uninsured or underinsured and have difficulty accessing Pfizer medicines can call our toll free number at 866-706-2400, or pfizerhelpfulanswers.com.”

She concluded, “We at Pfizer are grateful for the opportunity to work with you and look forward to working with you in the future.”

At that point, several people in the audience shared their appreciation for being included in the Pfizer Sharing the Care program and expressed their confidence in CVCHC staff and services.

“I appreciate all of you speaking about things that are good for you at the Health Center and the Pfizer program,” responded Manifold. Noting that because he is not a provider, he usually does not have contact with those utilizing the services, he shared, “So it's particularly special for me to hear how important the health center is to you.”

Dr. Bashore also expressed the center's appreciation to the Susan G. Komen Foundation, which he said has provided a $50,000 grant over the last several years.

“We have been able to do a significant number of screening mammograms for free through that program,” he shared, adding that within the next week they would be working on the application for a renewal grant.

Explaining that those free mammograms are available to the uninsured but must be scheduled by the end of the month, Mackenzie advised calling Minnie Tate at CVCHC for more information.

Acknowledging the need for replacing the old film machine with new digital technology, County Administrator Rebecca Carter shared, “I am so thankful that the people in our area will now have that.”

Before ushering the guests from the lobby to the mammography suite for the ribbon cutting, Manifold encouraged them to visit the new walking and jogging track. “It's free for the community to use at anytime-the gates are open,” he stated.

With that, the crowd followed the pink footprints stenciled on the floor leading to the renovated mammography suite and the new machine.

When Debbie Smith, flanked by Bashore and Manifold, cut the ceremonial ribbon, an advanced level of care took its rightful place beside a pair of pink footprints at the digital mammography unit. For this rural community, it was definitely a step in the right direction-a step to better health.