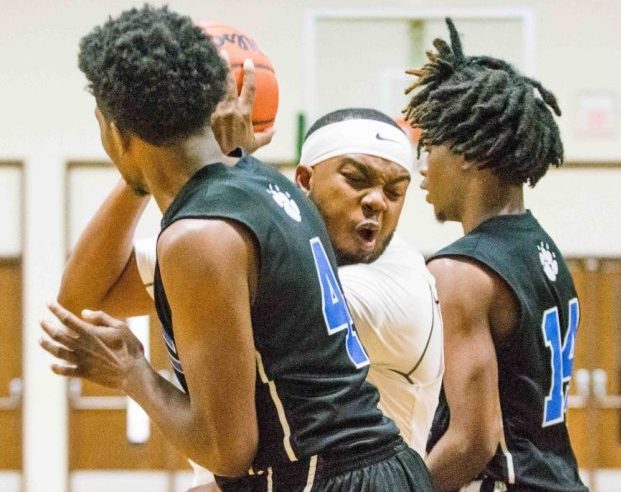 SVCC’s Tae Holmes looks for an opening on this drive between two Bryant & Stratton MIT defenders in action from the Panthers’ 90-63 win on Sunday afternoon.

The Southside Virginia Community College men’s basketball team broke out to a double-digit lead eight minutes in and never looked back Sunday afternoon. SVCC picked up a 90-63 victory over Bryant & Stratton MIT, improving their record to 4-3 on the season.

SVCC trailed early but a rebound and putback by Marquise Petty gave the Panthers a 11-10 lead at the 15:52 mark of the first half.

The Panthers picked back up where they left off in the second half as treys by James and Joseph Jiggetts ran the lead to 64-47 at the 11:26 mark. Two treys by Holmes extended the lead to 73-58 at the 6:50 mark and the local team cruised down the stretch to the lopsided win. Holmes and James led SVCC with 17 points apiece while Petty scored 15 and David Gant added 10.

What’s next for SVCC?

The team will return home on Saturday to face the College of Southern Maryland at 2 p.m. at Park View High School.