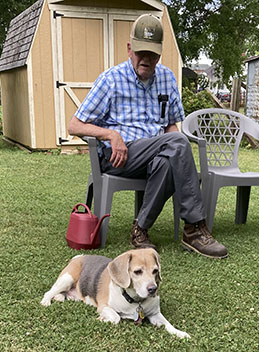 He was born and raised on a farm in Cumberland, where he raised tobacco and many other crops. He served his country in the U.S. Army before coming home to marry his wife. He was the manager/owner of Farmers Supply Co from 1971 – 1995. After this he worked for Putney Mechanical until his retirement.

He was proud of his involvement in the Town of Farmville. He served as President and Vice President on the Zoning Board of Appeals, was an Officer of the Downtown Merchants Association, President of the Farmville Exchange Club and also Chairman/Treasurer of the Farmville Fire Dept. Spring Bash. He loved to raise a garden and share his vegetables with friends and family. He loved to go out to eat and see his friends and you could often find him riding in his yellow truck around town.

He is survived by his daughters, Sandra Dilly (Mitch) of Farmville and Cindy Marks of Richmond; two grandchildren, Gus and Ben Humphrey; as well as his faithful beagle, Bailey.

A visitation will be held on Saturday, Jan. 14, from 10 – 11:30 a.m., at Puckett Funeral Home. A graveside service will follow at noon at Trinity Memorial Gardens.