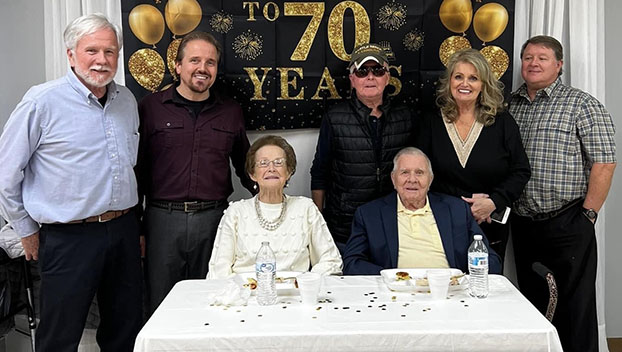 The Foxes’ extended family gathered together in December for a celebration of their 70 years together.

FARMVILLE – Wynelle and Freeman Fox achieved a milestone in December that few can reach. The Prince Edward County residents celebrated 70 years of marriage on Dec. 10, 2022 in Farmville, with their children, grandchildren and great-grandchildren around them. Sadly, Wynelle passed away soon after that, with her obituary running in the December 22 edition of The Herald.

But as we had originally planned to spotlight the couple’s 70 years of marriage, with permission from the family, we’re going to still do that, detailing pieces of their life together.

More than 60 years in Farmville

The Foxes called Farmville home for more than 60 years, moving here from Henrico in 1960, when Freeman accepted a job with the Lance Corporation. Wynelle was a stay at home mom until all the children were in school. She worked for Stackpole for a number of years and retired from what was then Longwood College after 27 years as an administrative assistant.

Some of our older readers might also know the couple from a business they owned in Farmville during the 60s and 70s. The Fox family ran “The Bookworm”. This was a book, card and gift shop located in the College Plaza Shopping Center.

Throughout the 60’s and 70’s, Freeman Fox was very involved in coaching little league baseball. Family members remember spending many spring and summer nights at the ball field.

The couple also left a mark on a local congregation, as they were founding members of Heritage Baptist Church here in Farmville. Freeman served as a deacon and, until his recent stroke, sang in the choir. Wynelle was very involved in Vacation Bible School, as well as the WMU and church quilting groups.

Freeman and Wynelle, upon retirement, purchased a second home in Florida where they spent late fall and winter months. They were fortunate enough to be able to travel back and forth for 24 years. They were just as involved in church and community during those months they spent in Brooksville, Florida. Her family says Wynelle’s passion for quilting soared while there and she enjoyed her quilting groups both in Florida and at Heritage Baptist Church in Farmville. Over the years, every member of the Fox family received a special quilt made just for them by her loving hands.

“They just never believed in giving up,” said the couple’s daughter, Carol Fisher. “Their religion was very important to them and they took their marriage vows seriously. For better or worse, richer or poorer, in sickness and in health, til death did they part.”