No deer for the season 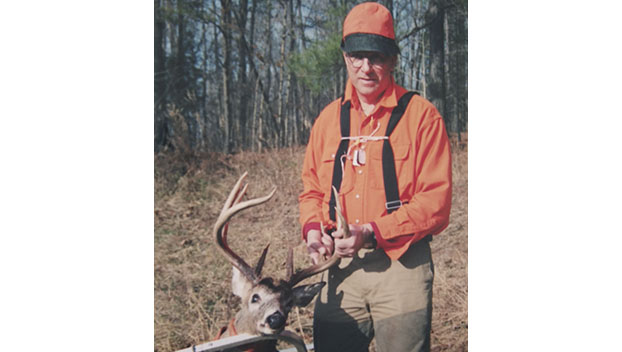 I knew that day or season would come when I grew older. Little did I know that it was right before my 80th birthday. This doesn’t occur until May 15 but I needed more time (I thought) to prepare myself for the eventuality…seemed like age 95 would be a good time. After preparing all of my equipment to include my trusty Remington 700 automatic, 30-06, there was no deer for the season.

Caryl was completely supportive as usual and purchased frozen dinners, canned goods, fruits and other assorted items as she looked forward to getting me out of the house for trips to the Goodloe Hunt Club, west of Buckingham Court House. From club stands you can see the Willis Mountain in all of it glory, except for the part torn down by Kyanite mining. To think this happened in the sacred landscape of Virginia at a point not even close to West Virginia boggles the mind. Used to pass Gene Dixon, an owner of the mining company, in the woods near the Willis Mountain but he’s dead now as are most of my old friends/hunting buddies.

I rolled into the Goodloe Hunt Club for my hunts in November and December, 2022, had some degree of interaction with the members sitting around in the lodge, and ate my frozen dinner (and a few other snacks) and turned in early each time in my assigned bunk bed. As usual checked out the impressive buck mounts outside of the long term club members’ bunk rooms.

I decided to join the club two years ago after I found I could still walk and check on bullet holes in the 100 yard range. Have loved hunting in Buckingham since 1955 when my uncle, Metellus Ftizpatrick, led me across ice covered low grounds. That was some fun, to include the part where we dried my socks over an open fire.

In my bunk bed I was toasty warm as I curled up in my L. L. Bean sleeping bag, good to 20 degree below zero, and started counting big bucks jumping over laps and Buckingham rocks/cliffs before I went to sleep. There was steady yakking outside my room as the younger and hardy hunters stayed up well past my 9 p.m. bedtime and would roll out of the sack at 4:30 a.m. for the next day’s hunt.

Went to the bathroom my usual three times in the middle of the night. The pellet stove outside my room provided warmth but the bathroom had no heat (except for a wall heater that could be turned on for genuine emergencies like taking a shower). Stumbled around in my dark room, got back in my unzipped sleeping bag but then I couldn’t get it zipped up. Plus it was wrinkled on the bottom in certain places. Said “the hell with it” and regained my composure in spite of all of the obstacles and got some semblance of sleep.

Disconnecting and reconnecting the sleep apnea mask was another obstacle but it blows air through my throat and brain and lessens dementia so medical professionals who swear by it say. I’ve done a bit of swearing about it after Caryl said I stopped breathing in my sleep and was tested as needing it. Of course, being outside in a deer stand, especially on a windy day, also is good for air through everything. It especially picks up when you have to remove your insulated jump suit and other warmth when nature calls.

Got up at the appointed times due to two alarm clocks and faint voices outside my room since I don’t sleep with my hearing aids on. Didn’t have to make coffee since someone made a community pot. Had my “delicious” Jimmy Dean frozen breakfasts plus a few other accessories.

On one hunt inserted the four bullet clip in my 30-06, drove my Toyota Tacoma pick up with Dave Patterson riding shotgun to the appointed deer stands, and tried to get a shell in the barrel. The clip was jammed in the gun and we finally had to use the back end of a claw hammer to get it out. Dave, a gun smith (and retired Green Beret with three tours in Vietnam) put the clip back together and I was ready to shoot that big buck (or even a doe as I got increasingly desperate). He smiled as he followed me stumbling up a hill and said, “Since you like to write maybe you could write a story about how you installed that clip.”

Went down to my accident free “condo” that was a comfortable, basically small house, only 6 feet off the ground with two office type chairs inside, no less, on rollers. Raised all of the windows for possible shots from three sides and found that the chairs weren’t high enough to see directly below the stands. Maybe I’ve shrunk in my old age and even though I used to be 6 foot, 3 inches tall can’t even see out of a deer stand. So to remedy this practiced doing up and down posterior movements. This was great exercise to stay warm (on future trips took a thick cushion to remedy this problem).

Gingerly got out of the deer stand with my 30-06 and back pack. No worry about falling because there was a nice ladder but the door on the “condo” had swung wide open and when I brought it back to hold it on a close position to the door frame my ring finger hung up in the round lock catch. Then the door flung open with my finger still in it. Almost pulled me off the ladder but due to my steely grasp with the other hand on the ladder I finally swang the door close enough to extract my finger. Still can’t wear a ring due to that slight mishap and swelling.

The nursing staff at the Cardiac Rehabilitation Center, Chippenham Hospital, where I go for exercise since installation of my pace maker in July, 2022, were most sympathetic about my injury and said a place like Patient First might x-ray and bind it. Didn’t bother since it’s just one more injury I intend to get over such as spraining my ankle when jumping on brush piles to chase out rabbits, hurting my hip when creek banks caved in, etc. Doesn’t pay to be soft when exploring the great outdoors.

Faced a near death experience when the physician installed my pace maker and unbeknownst to anyone stabbed my heart with blood leaking into the pericardial sac and Caryl rushed me to Chippenham and saved me on that one. Only fell out of one ladder tree stand when trying to take it down after dark so that and the other 23 cats’ lives I have known don’t seem to matter.

On the next trip to the woods, without anyone, decided to take my Arctic Cat 400. Went out to the metal storage building where’s it kept and saw that the front left tire was low. Pulled my Tacoma next to the building and then pulled the ATV next to the open passenger door so I could run the tire compressor that plugs into the cigarette lighter. There was the bank with a narrow driving area (woods on one side), a deep ditch, and then the metal building.

After pumping up the tire backed up the ATV since the open door was blocking front progress. Promptly backed the ATV into the ditch next to the building and jammed the right side of the ATV against the outer wall. Couldn’t get the ATV to go forward and could have hooked up a rope to pull it out but decided I could lift the back of the ATV to get it off the wall and pointed out of the ditch. Sprained my back that lasted for several days but hey, success is success!

Saw two does during the 2022-23 hunting season and they were in the wind when they crossed the pipe line near me.

Checked my freezer when I finished the season and still had an ample supply of deer meat from last year.

While I was puttering in the yard Ben Hopkins, our neighbor who lives behind me, came over and said he saw two does in his yard.

Now why is that? First time in years that I’m aware that deer have ever appeared in the Kendale Acres Subdivision, Chesterfield County. Could it be that they are taunting me for being such a lousy hunter?

As soon as I get over the ablation to correct the heart afib and flutter on Jan. 23 and next hunting season rolls around we’ll see about deer getting so bold they’re now in the neighborhood.