Hampden-Sydney falls to No. 2 Randolph-Macon 69-57 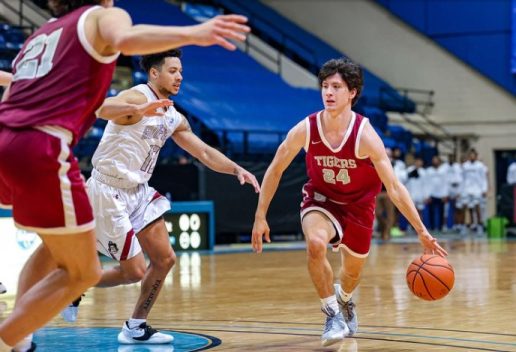 Junior DJ Wright (Greensboro, GA) added 11 points for the Tigers (9-4, 4-1 ODAC), who trailed 31-28 at halftime and had their recent seven-game winning streak stopped. Miles Mallory had a double-double with 14 points and a game-high 10 rebounds for the visiting Yellow Jackets (12-1, 5-0 ODAC), who have now won 10-straight games, while Jabril Robinson added 13 points and a game-high six assists.

“Rough night for the Tigers,” said fourth-year head coach Caleb Kimbrough. “I didn’t think we played with the type of grit and discipline that I know we are capable of especially on the defensive end. Give them credit, they are a good team … but that was not Tiger basketball tonight. With that said, we are so appreciative of everyone that came out to support. It was a great environment tonight considering the students were on break.”

H-SC, getting votes (51) in this week’s D3hoops.com Top 25, took an early 9-2 lead at 16:45 behind five quick points from Wright, including a three-point field goal, and the Tigers led 12-5 with 15:14 on the clock after a three-pointer off the bench by freshman Ryan Blakey (Accokeek, MD). The Garnet & Grey maintained their advantage and was ahead 18-12 at 8:37 following a driving layup from Brazil, and the hosts still led at 22-19 with 5:33 on the clock after a steal by Blakey led to a slam dunk by senior Ryan Clements (Conyers, GA). R-MC, ranked No. 2 in this week’s D3hoops.com Top 25, finally got going and used a 12-3 run to take a 31-25 advantage late in the opening half. A buzzer-beating three-pointer from Brazil made it a 31-28 contest at the intermission.

R-MC continued its momentum to begin the second half, taking a 38-30 lead at 15:59, but H-SC answered with seven-straight points from Brazil-including another three-pointer-to close to within 38-37 with 14:24 remaining. The Yellow Jackets, however, responded with a 21-6 run to take control and lead 59-43 at 6:12. The visitors took their largest lead at 65-47 with 3:33 on the clock, but the Tigers refused to quit down the stretch and battled back to within 65-55 in the final minute behind two dunks from junior Davidson Hubbard (Charlotte, NC) toward the final margin.

Brazil led H-SC with his game-high 17 points, including 3-5 three-pointers, adding five rebounds and three assists. Wright finished with his 11 points for the Tigers. Junior Josiah Hardy (Ashburn) contributed nine points and eight rebounds, while Hubbard had eight points and nine rebounds, and Blakey had five points and five rebounds. H-SC shot 37% (24-65) from the field, including 33% (7-21) on three-pointers, and 67% (2-3) at the free throw line.

Mallory led R-MC with his 14 points and game-high 10 rebounds, adding a game-high three blocks, as well. Robinson had his 13 points and game-high six assists for the Yellow Jackets. Will Coble and Josh Talbert each contributed 12 points, with Talbert adding four assists. R-MC shot 45% (27-60) from the field, including 40% (8-20) on three-pointers, and 64% (7-11) at the line.

H-SC will play on the road at ODAC member Shenandoah University on Saturday, January 7, at 2 p.m. in Winchester, before returning back home to Fleet Gym for conference games against Ferrum College on Wednesday, Jan. 11, at 7 p.m., and then Bridgewater College on Saturday, Jan. 14, at 2 p.m. Both the Ferrum and Bridgewater games can be heard locally on WVHL Radio, Kickin’ Country 92.9 FM.