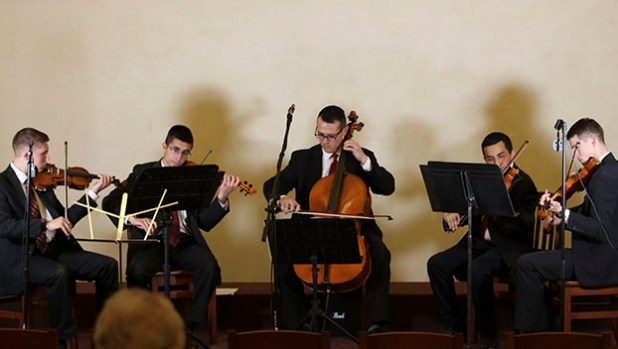 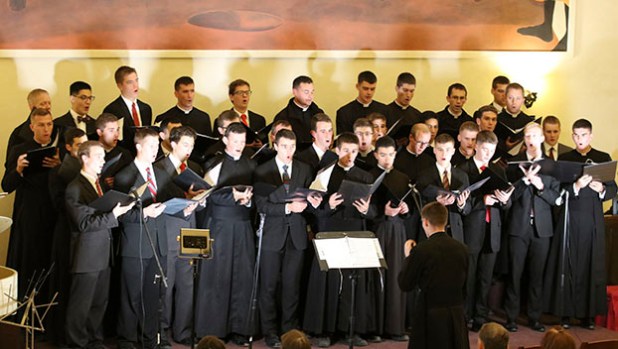 With plenty of Christmas cheer, lots of home-baked cookies and 22 gallons of homemade hot chocolate, St. Thomas Aquinas Seminary in Dillwyn hosted a public service Christmas Concert on New Year’s Eve. With guests driving from as far away as Kentucky, their grand dining hall was filled to capacity for the event.

Since music, and especially singing, plays an important role in the Catholic liturgy there is a thriving musical culture at the Seminary which was happy to be able to share its talent with the local community. More than one third of the student body participated in the performance which was directed by Dominic Reen, now a fourth-year Seminarian who grew up singing with his family, The Reen Family Singers, near Indianapolis, Indiana. He was helped by a second-year seminarian, Xavier Diaz who has played in a Mariachi band and taught orchestra for years in El Paso, Texas.

The theme of the Concert was “Christmas Music Through the Ages,” featuring Christmas carols in six different languages composed at various times over the last thousand years. The program started with one of the most ancient forms of Western Music, Gregorian Chant. Then Renaissance polyphony from Victoria was followed by a lively Spanish carol from the 16th century, Riu Riu Chiu. A string quintet, playing Vivaldi’s Winter excerpt from the Four Seasons was succeeded by a thunderous organ piece, Carillon by Louis Vierne. A medley of old Christmas favorites sung in the barbershop tradition was followed by instrumental renditions of some classics among which were “We Wish You a Merry Christmas” and “Jingle Bell Rock” featuring a saxophone, harmonica and a small band. Finally, the hauntingly beautiful “O Magnum Mysterium” (O Great Mystery) released in 2006 by American composer, Morten Lauridsen, finished up the memorable concert.

PUTTING THE FOCUS ON JESUS

“This concert is about putting Jesus back at the center of Christmas,” said the MC, Daniel Enriquez, a Seminarian in his fifth year of studies. “How would you feel if everyone was celebrating your birthday, but no one bothered to think of you?” He carried on to explain the important role of Mary, the Mother of Jesus, in the Christmas celebration. “In every birth there are only two people involved,” He said with a smile. The Seminary offered a small medal in honor of Mary to everyone who wanted one. “She has given us the great gift of Jesus, and we honor and love her for that, that’s why she keeps coming up in the songs and carols we sing tonight.” Daniel said.

Though it was free and open to the public, one of the attendees was enthusiastic, “I would’ve gladly paid for that!”

“The talent that the Seminarians have here is so diverse… it was amazing, absolutely amazing,” said Larry Kocurek who brought his whole family to the event. “It was a wonderful, wonderful start to the New Year. We’ve been talking about it non-stop.”

If you were not able to attend, or RSVPed too late to get a seat, you can watch the live recording of the Concert on the Seminary’s YouTube channel: youtube.com/@ SSPX-STAS. If you would like to have one of the medals in honor of Mary you can request one for free online at stas.org.

The Seminary plans to make the Concert an annual Buckingham tradition: he date is already set for the 2023 Concert: Sunday, December 31st, 2023 from 2:30 to 4 p.m. Mark your calendars, they hope to see you then.