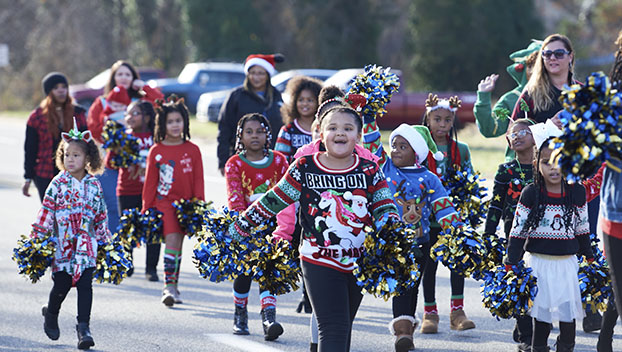 Photo taken by Connor Thompson for The Farmville Herald.

CUMBERLAND – What are some of your family traditions when it comes to Christmas? Do you make gingerbread cookies on Christmas Eve for Santa? Do you watch shows about Rudolph the Red-Nosed Reindeer or Frosty the Snowman? Maybe you gather with your family and read the Christmas story out of the Bible. Christmas traditions were on display Sunday, Dec. 11, as Cumberland County held its annual Christmas parade.

With a theme of “Christmas traditions in Cumberland”, more than 50 floats, vehicles, fire engines and bands made their way down U.S. 60. Scott Gordon and Gary Archer served as this year’s grand marshals. The two Cumberland County music teachers are both retiring after this school year and the community wanted to pay tribute to them with this honor.

Barbara Gamage, who helped organize the parade, said she appreciated the Cumberland NAPA Auto Parts staff and their work. The parade lined up at NAPA to get started on Sunday.

“(I appreciate) Kevin Ingle and his workers in seeing that the lineup was ready (and for their work) getting everyone through the parade on time,” Gamage said.

She also thanked everyone who took part in the parade, along with the spectators who set up chairs and blankets to sit along the road and walk the event.

Here’s a look at some of the sights from Sunday’s parade. Click the right arrow to scroll through:

As for who won? There were several winners in multiple categories. First place in the Religious Float category went to Payne Methodist Church, with Unity Methodist Church coming in second. In the Educational Float category, Cumberland Future Farmers of America took first, with the Cumberland County Public School Foundation in second and Zirkle Day Care in third. On the Civic Entry side, it was a tie for first, between the Southside Shriners and the Cumberland Youth Athletic Association. Girl Scout Troop 1253 finished second and Friends of Cumberland County came in third.

And then we had the antique cars. That’s one of the unique things about the Cumberland County Christmas Parade. Every year for the last 20 years, a number of antique cars have been on display and this year was no different. Billy Pepper took first place in the antique cars section, with Randy Featherstone winning first in the 50’s Modified Antiques.

If you want to see more photos from this weekend’s parade, just look below. Use the right arrow to scroll through: