Racing teams get jump start on 2023 with offseason testing 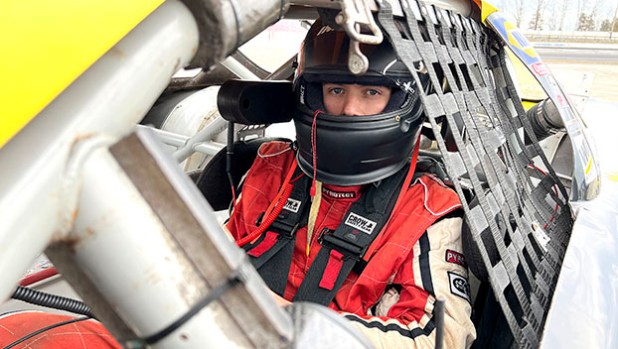 Zach Peregoy of Clarksville waits patiently in his car as team members make chassis adjustments during testing Monday at South Boston Speedway. Peregoy was using the testing opportunity to gain more seat time and to attempt to improve his car’s performance. 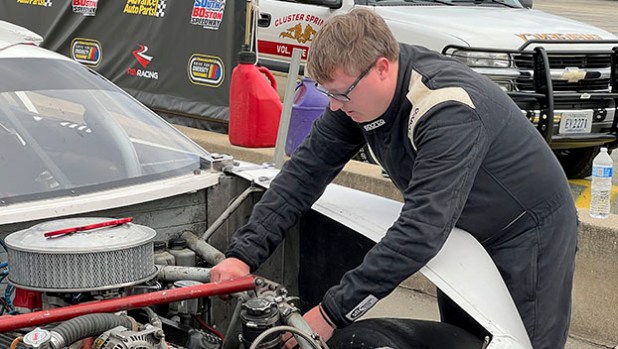 South Boston native Stacy Puryear and John Goin of Brunswick, both of whom will be competing in the Sentara Healthcare Late Model Stock Car Division next season, 2022 South Boston Speedway Budweiser Limited Sportsman. Division Champion Kyle Barnes of Draper, teenager Zach Peregoy of Clarksville, who earned a top-five finish in the Budweiser Limited Sportsman Division point standings, and South Carolina resident Dusty Garus tested at South Boston Speedway December 12-13 to get a jump start on preparations for the 2023 season.

Teams get jump start on 2023 with offseason testing

It has not been very long since the 2022 season at South Boston Speedway concluded, but drivers and race teams are already gearing up for the start of the 2023 season.

South Boston native Stacy Puryear and John Goin of Brunswick, both of whom will be competing in the Sentara Healthcare Late Model Stock Car Division next season, 2022 South Boston Speedway Budweiser Limited Sportsman. Division Champion Kyle Barnes of Draper, teenager Zach Peregoy of Clarksville, who earned a top-five finish in the Budweiser Limited Sportsman Division point standings, and South Carolina resident Dusty Garus tested at South Boston Speedway December 12-13 to get a jump start on preparations for the 2023 season.

Puryear, who tested on Tuesday, said it was important for him to get in some test time on the .4-mile oval.

“We built a new car for the 2021 Martinsville race, and we have had an issue with this car from Day One,” Puryear said. “We have run well with it, but we’re trying some things to get better. The car has been extremely fast, but it doesn’t have the longevity in it that I need to win races. We’re a little bit off and we need to get better.”

Puryear, who had a pair of Top-10 finishes in four starts at South Boston Speedway in 2022 with a best finish of sixth-place, pointed out he needs to have better performances at his hometown track.

“I never thought Late Model Stock Car racing would reach the pinnacle it is right now,” Puryear continued. “There are so many good cars and so much money involved in the sport now. Late Model Stock Car racing is now probably where the Busch Grand National Series and Hooters Pro Cup Series were. You’ve got to be on your game. You cannot say ‘okay, we’re good enough.’ If you do, you’re not going to win races.”

Goin, who had one Top-5 finish and four Top-10 finishes in nine starts at South Boston Speedway in 2022, was also looking to improve the performance of his car.

Barnes, who won eight of the season’s 13 Budweiser Limited Sportsman Division races on the way to winning the division title and the division’s Most Popular Driver Award, said it was important for him to make the three-hour drive to test at South Boston Speedway this week.

“You’re always trying to get out here and get that little bit of an edge on your competitors,” Barnes pointed out.

“You can try things and re-evaluate where you are. We’re trying a different shock package today than we normally run just to see if it works and see where a good starting point for next season will be. The weather is obviously going to be different (when the season starts), the rubber on the track is going to be different. If we can find that starting point, we will be in a good spot.”

For Peregoy, the test session was about getting more seat time and trying different things with the car with an eye toward making performance improvements for the 2023 season.

“I’m just trying to get a little more seat time, trying to get a little more experience,” Peregoy explained. “The more track time and more seat time you can get the more you learn. I’m trying to learn some new things to help me next season. Doing this helps a lot because we can take what we see and go back to the shop, have the winter break to talk about what we learned, and talk about what we want to try when we come back.”

“I wish I could have won Rookie of the Year, but we finished in the top five in points and that accomplished our goal,” Peregoy remarked. “It was exciting racing in my first full year and finishing in the top five in points. I couldn’t have done it without my dad (former racer Tommy Peregoy), Chris (Elliott) and I thank them and my family for their support.”

“Our cars and trucks are taken care of at Stacy Puryear’s shop, so it works out pretty well for us as far as getting up here and having an opportunity to test,” Garus said. “Having the opportunity to come up here and get some seat time is a huge benefit for us. We’re going to dabble in the Limited Sportsman division and hopefully make a good run at it.”

“It’s a little different from anything I have raced on,” Garus pointed out. “It’s got a good bit of grip. It’s a fast track, but not real big. It carries a lot of speed. I’ve got a good coach in Stacy. He gets around here really well. Being able to come out here with him and learn the ropes is huge.”