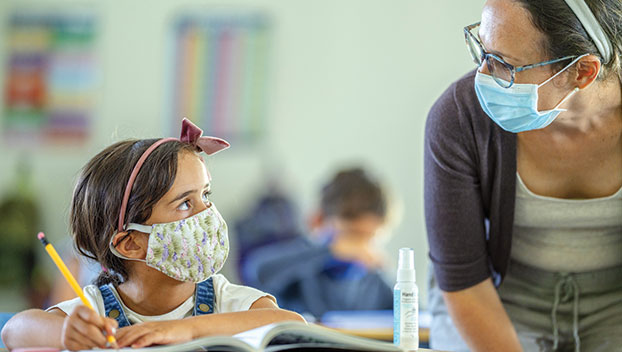 When Virginia Gov. Glenn Youngkin took office, he signed Executive Order 2. The bill stripped school districts like Prince Edward and Buckingham of the ability to require community masking as a way to prevent a COVID-19 outbreak. Basically, schools could no longer require students to wear masks. That will be changing, as the result of a court case.

On Monday, Dec. 12, a settlement was reached in the case of Christopher Seaman vs. The Commonwealth of Virginia. Almost immediately after Youngkin signed Executive Order 2, multiple parents filed a lawsuit, arguing that requiring masks is a right covered by federal disability laws. The U.S. District Court for the Western District of Virginia agreed. Rather than appeal, state officials came to a settlement on Monday.

As part of the deal, letters went out to all of the districts where children represented in the case attend school. Those letters say if a parent asks, the district has to require both children and teachers to wear masks, in order to stay in compliance with federal disability laws. The same goes for Prince Edward and all other districts. If a parent requests in writing for masks to be mandated due to their child’s disability, then districts will be required to at least hold a hearing to consider the case.

“The (Americans with Disabilities Act) and Rehabilitation Act forbid discrimination on the basis of disability and require schools to make reasonable modifications to their policies and practices to accommodate students with disabilities,” the settlement says.

Now to be clear, this isn’t a permanent change. The settlement does go into effect immediately, but it only remains in effect as long as any of the plaintiff students attend a Virginia public school. As most of the children involved are in elementary school, that will be at least until 2030.

“We’re hopeful that every school in Virginia will view this settlement as a sign that they should make similar accommodations for their students, even if they are not part of the case,” said Eden Heilman. She serves as legal director for the ACLU of Virginia.

The law behind the case

Under the Americans with Disabilities Act and Section 504 of the Rehabilitation Act, public schools cannot exclude students with disabilities, deny them equal access to their education, or segregate them unnecessarily. They are also obligated to provide reasonable modifications to policies, practices, and procedures to give students with disabilities an equal opportunity to benefit from their public education.

“Keeping students safe is a core tenet of every school in the Commonwealth, and we’re pleased to see the Youngkin administration recognize it as such with today’s settlement,” said Colleen Miller, executive director, disAbility Law Center.

The parents of the plaintiff students are represented by the ACLU of Virginia, the Washington Lawyers’ Committee, Brown, Goldstein & Levy, the disAbility Law Center of Virginia, and Arnold & Porter.

“We are proud to have stood up for these parents and their children for the right to equal access to school,” said Eve Hill, partner at Brown, Goldstein & Levy in a statement. “No school in Virginia should risk the life and health of students with disabilities by refusing to require masking when necessary.”