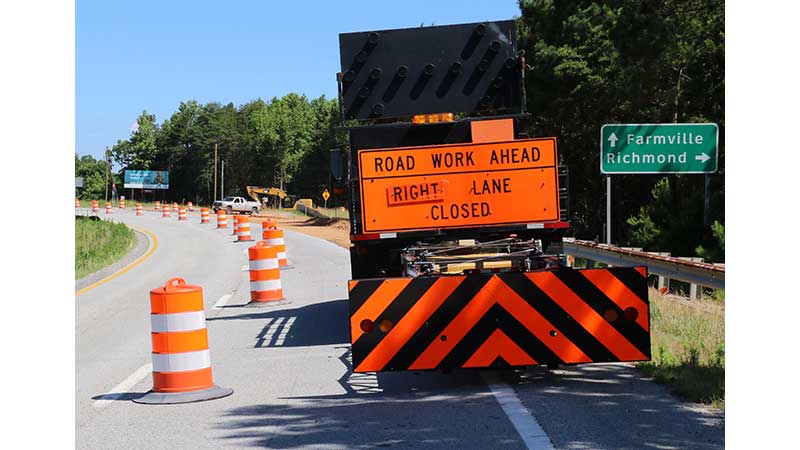 Construction work has begun by VDOT to reconstruct the U.S. Route 460 and Route 307 intersection just outside of Farmville. (Photo by Titus Mohler)

The numbers don’t lie. The interchange between Route 460 and Route 307 is a problem for Prince Edward County. Since November 2020, angle crashes and road departures (that is, vehicles going off the road) have dramatically increased. In that time, there have been 10 angle crashes and 17 road departures reported, according to the Virginia Department of Transportation (VDOT). But that’s likely not the actual number.

“(Looking at) the amount of skid marks on the islands out there, I think there’s a number of people that have had accidents that haven’t reported (them),” said Scott Frederick. He serves as VDOT’s resident engineer in Prince Edward County.

The interchange problem at Route 307 is something local governments, traffic officials and law enforcement have brought up several times over the last few years. The issue is finding a solution that sticks.

“It’s been talked about many times,” Frederick said. “The sheriff wrote a letter requesting a speed reduction. We added striping to try and make people more aware that the right lane was going to peel off and go on 307. We added rumble strips to alert the drivers. We increased signage (in the area). It doesn’t seem like we did enough, but we were hopeful that would fix it.”

The majority of road departures are from people coming off of 307, Frederick said, with speed playing a key role.

“They’re going too fast and lose control,” Frederick said. “There was an 18-wheeler accident about two and a half weeks ago where that guy flipped over and slid across 460. Speed was a contributing factor to that.”

What are drivers doing?

Despite the attempts, accidents keep happening in the area. Speaking to the Prince Edward County Board of Supervisors during their Tuesday, Dec. 13 meeting, Frederick outlined what VDOT is currently doing to deal with the issue and what they’ll look to do in the months ahead.

“In the last week, we went out there and enlarged the stop signs on 307,” Frederick told the board. “Now they’re 48 inches. On 307 when you’re approaching the intersection, we’ve added a flashing yellow light to the stop ahead sign. Maybe it’s dark out and you’re not paying full attention. It forces you to pay attention. We’ve also deployed three message boards and they’re going to stay out there.”

Frederick added that VDOT work crews have also installed a live camera, focused on the interchange. The goal is to see what drivers are doing and try to come up with other potential ways to avoid accidents at the location. He added that VDOT hasn’t completely said no to Prince Edward County Sheriff Tony Epp’s request, to lower the speed limit, but they want to try other options first. The reason, Frederick said, is that VDOT officials aren’t sure people would actually follow the lower speed limit.

“There’s a thing called the 85 percentile speed,” Frederick said. “It’s where 85% of drivers feel comfortable going that speed. And as of current numbers, people approaching that intersection still feel comfortable going 60, 65 mph. That’s where people will try to drive and I feel like you’ll have a level of non-compliance with a lower speed limit.”

What happens next with Route 307?

Instead of lowering the speed limit, Frederick said VDOT plans to test other options in the months to come. One involves setting up white flex posts, to divide off the right turns. Also, the department will install LED stop ahead signs, to try and reinforce the idea that drivers need to slow down.