How do you fix Prince Edward’s school traffic? VDOT has an idea 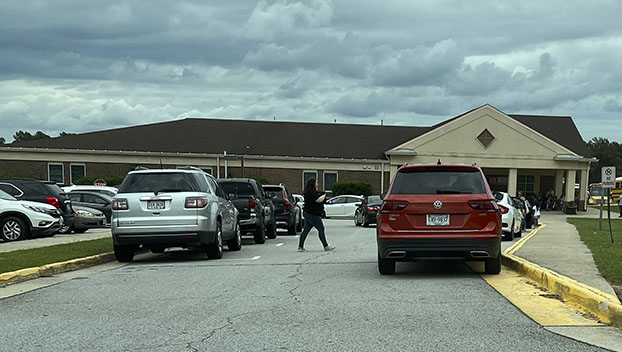 FARMVILLE – There’s several ways to deal with school traffic in Prince Edward County and they don’t involve construction. That was the assessment from officials with the Virginia Department of Transportation (VDOT), as Prince Edward County Administrator Doug Stanley asked them to take a look at the situation.

“(Right now), one or two left turners or a parent who decides to park in the wrong spot could mess the whole things up,” said Scott Frederick. He works as VDOT’s resident engineer in Prince Edward County. “I think there’s a lot of different ideas about what could be done to alleviate some of the congestion. We’ve talked about it at VDOT several times.”

And to be clear, Frederick isn’t talking about ideas that involve waiting until the county has enough money. These are concepts that could be put in place now.

“Ideally, we could come up with a solution where we wouldn’t have to put any asphalt down (or) buy school buses,” Frederick said. “We could channelize the traffic in a certain way.”

He laid out some of those proposals during the Tuesday, Dec. 13 meeting of the Prince Edward Board of Supervisors.

First off, he suggested changing what drivers are allowed on Zion Hill Road.

“(VDOT could) make it a one-way road on Zion Hill, so you can drop your kids off and then come back out on Granite Falls,” Frederick said. “We could stagger start (and dismissal) times of the schools. We could put a temporary barricade in the middle (of the road) to direct traffic.”

But to make this happen, Frederick said, VDOT would need some help. He proposed a workgroup.

Coming up with a school traffic solution

Frederick said the best way he sees to narrow down the options and decide on a path forward is a joint workgroup. By that, he means bringing members of the school board in with the county staff. He also wants to get some of the Parent Teacher Association groups from the schools involved, along with Prince Edward County Sheriff Tony Epps and other members of VDOT. The goal would be to take all of these options VDOT sees to deal with school traffic and choose one (or more) to put in motion.

Every week, The Herald receives at least one email or message on Facebook about traffic problems at Prince Edward County schools, with the majority focused on the elementary. Parents are upset about being blocked in by others, about long lines with what they see as no organization and yes, with residents parking in the wrong spot.

“I think a workgroup would be beneficial in solving this issue,” said Prince Edward County Supervisor Harrison Jones. “Everyone agrees that we need to find a solution. A special task force would be well suited to hammer out the details of our options. It’s important to have an open mind as we approach the problem of school traffic. Mr. Frederick offered preliminary suggestions of possible solutions, but I think the workgroup should be formed and consider the impacts of any decision for all involved parties before we come to any conclusions.”

“This is something that’s been talked about quite a bit and it’s a real issue for people,” Watson said.

Watson said he loved the idea of staggered times for schools. He pointed to studies done by Princeton and Harvard that younger children learn more early in the morning. Watson also liked the idea of using Zion Hill and Granite Falls as one-way streets. But he did have questions. If schools have staggered start and dismissal times, does that mean more bus routes? What would the financial aspect look like?

“I don’t know how much added transportation cost that would bring,” Watson said. “It’s certainly something to consider. Utilizing the road that a lot of people call ‘The Road to Nowhere’ makes a lot of sense to me.”

Johnson said while she hadn’t talked with Frederick or anyone from VDOT about the workgroup proposal, she’s interested.

“I have not spoken with them at this time but I look forward to meeting in January,” Johnson said.

The same goes for others on the list. Everyone seems ready to sit down and get a plan in place. Understandably, there was especially some excitement over the point that it wouldn’t take years to wait for funding. Everything proposed so far are things that mainly involve planning, rather than construction.

Frederick did caution, however, not to expect all issues to be permanently resolved with this.

“I think we could improve the situation, but I don’t think we can cure school traffic,” Frederick said.