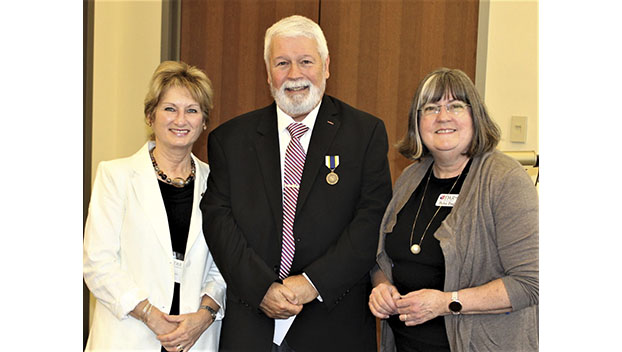 Retired U.S. Air Force officer, Col. Greg Eanes, was the guest speaker during the Nov. 12 meeting of the Judith Randolph-Longwood chapter of the Daughters of the American Revolution (DAR). The meeting was  held at The Barbara Rose Johns Farmville-Prince Edward Community Library.

Eanes is a writer of books and monographs on history and speaks at the Wilson Center for Leadership in the Public Interest at Hampden-Sydney College.  His presentation, titled “Tarlton’s Southside Raid,” told of British Lt. Colonel Banastre Tarlton’s progression through Southside Virginia during the American Revolutionary War, with a spotlight on Prince Edward County.

Some of the areas which were highlighted during the presentation were Ward’s Tavern in Nottoway County, Amelia Court House, Prince Edward Courthouse (which was located in present day Worsham) and Slate Hill, home of Nathaniel Venable, one of the founders of Hampden-Sydney College. Slate Hill was located just south of Worsham. Tarlton also traveled to Patrick Henry’s home and then to New London where he was met with a concentration of Continental soldiers so he went in another direction. He eventually retreated to the Portsmouth, Yorktown and Gloucester area where he met up with British officer, Charles Cornwallis.

Tarlton was said to be a fierce fighter but kind to the local people, although he did take food for his soldiers and burned several flour mills, among other atrocities.