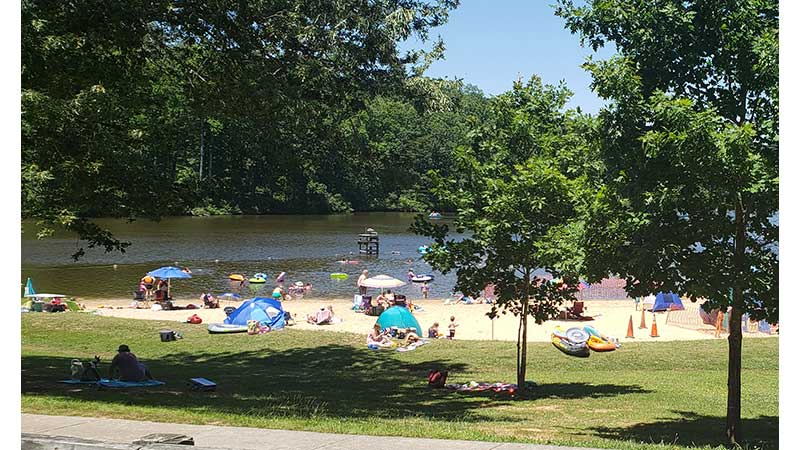 The beach at Bear Creek Lake State Park has been well-populated as of late.

On New Year’s Day, Bear Creek Lake State Park will start a new tradition, launching its first polar plunge. Residents can line up on the beach by 2 p.m. When the whistle blows, all participants will plunge into the lake. There’s no money on the line. This is all just for bragging rights. And while the goal is to create a new tradition, it follows a very old one.

A plunge at Bear Creek Lake

The idea of a polar plunge has been around for more than a century. The oldest-documented New Year’s Day polar plunge happened in 1904. According to the Boston Globe, the L Street Brownies, a swim club formed in 1902 in South Boston, Massachusetts, took a dive into the fairly cold waters of Dorchester Bay. Other groups have been following the concept ever since, with Bear Creek Lake as the latest.

The new event comes after years of faithful dedication to bringing fun communal activities to the park. Other events have ranged from Virginia State Park’s Lights at the Lake Festival, to First Day Hikes, and a summer archery program. The success of these events led to the creation of a new park tradition that seeks to bring more people together to enjoy Bear Creek Lake Park. The Lights at the Lake Festival and the First Day Hike have been some of the park’s most popular events, and the park’s team is hoping that the polar plunge will soon become a favorite event as well.

For nine years, the Lights at the Lake Festival event has fundraised for the Cumberland Christmas Mother. The First Day Hikes were an inaugural New Year’s Day park event that sought to bring people out to celebrate a new year.

The polar plunge is “something special for New Year’s Day,” Bear Creek Lake Park Ranger Tom Kneipp said. Kneipp has worked at the park for 16 years and has seen a variety of new events implemented. The addition of the polar plunge comes after years of polar plunge fundraising across the nation.

Historically the polar plunge has been a fundraiser for the Special Olympics. However, Bear Creek Lake Park’s polar plunge is still in its experimental phase. Right now, the focus is on trying to create a fun event for New Year’s Day.

Kneipp detailed how the park had seen the success of polar plunges across other communities and wondered how Cumberland County could implement its own polar plunge. As a new event, he said that the park is trying to gauge “if people are interested” in adopting the polar plunge as a new park activity. If the first polar plunge is successful, then the polar plunge could become an official event and a new tradition.

Kneipp and the rest of the parks team are curious to see the community turn out for the event. In preparation for the event, Kneipp has been checking up on the weather and waiting for the ice to melt.

“I’m excited to see who wants to do that [polar plunge],” Kneipp said.

New Year’s Day and the holiday season have been important to the Virginia Parks’ programming. This new addition to programming seeks to add to the joy of the holiday season. Bear Creek Lake Park has dedicated itself to being a “safe place to enjoy.” Above all else, preserving the feelings of enjoyment in nature is the park’s goal. Virginia’s state parks are a community for people to come together.

The addition of new events has the intention of building community and promoting awareness about the park.

“Everyone come out and take a plunge in nature,” Kneipp said.

Suzanne Bagia wrote this story for The Farmville Herald.