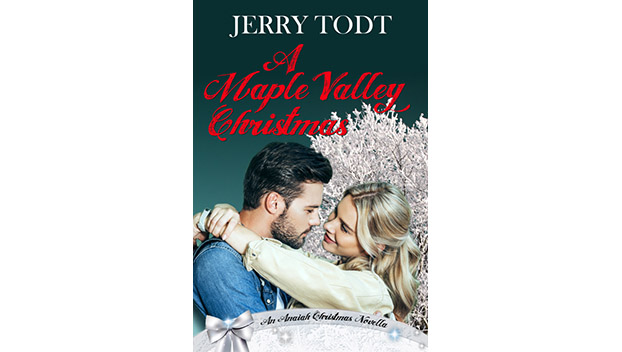 During the winter season in Farmville, you likely get to spend some time with family around your fireplace, eating delicious homemade food. Many of us also can’t resist the temptation of a sweet and wholesome Hallmark film.

Hallmark Christmas movies pull us out of the cold and into the warmth of tender romance, loving families and conflicts we know the characters will be able to overcome. They remind us that the holiday season can be a time of reconnection, renewed faith and so much more.

If Hallmark holiday movies are part of your family tradition, then you are not alone. Author Jerry Todt also has a deep appreciation for the classic films. His love of those storylines, hard work and just a bit of luck, helped him land his own Christmas romance on the big screen.

Todt’s always had a deep interest in writing.

“It was one of my favorite things to do when I was in high school… and then in college,” Todt said. “It was my artistic outlet, but I never thought seriously about being a published writer.”

The universe had different plans for Todt though, and when the economy crashed in 2008, he was forced to pivot in his career. He was brought back to the joy he found in writing and became determined to make his dream come true. He said to himself, “hey, I’m going to write a book.”

The first novel Todt wrote was self-published and distributed mostly among friends and family. He didn’t know much about the publishing business but wanted to “jump in with both feet.” His novel was well-received, giving him the encouragement he needed to start his second book.

All he needed was an idea.

Todt attended several writing conferences over the years and looked up the published writers he met. Learning about their processes and success was exhilarating, and Todt left every conference feeling encouraged and excited.

But then he got a new job and life got busy again. His dream got put on the back burner as he worked hard to raise his three daughters and enjoy life in Farmville. Then, he and his wife discovered Hallmark movies.

They began watching them regularly, loving the resilient characters and the wholesome nature of the content.

One day, when they were watching a film on the channel, Todt thought to himself, “I love these storylines.” And that’s when the realization struck, he thought, “I think I could write this.”

The idea hadn’t come to him before because Todt had never envisioned himself as a romance writer. In fact, his specialty was mystery novels.

Still, he took a leap and began writing his first romance, A Maple Valley Christmas. Once he’d written it, he spent about a year looking for an agent with little luck. But he believed in his story and knew it would resonate with readers. He wasn’t giving up.

Finally, he found a small Christian press, Anaiah, that wanted to work with him. The rest of his publishing journey, as they say, is history.

FROM THE PAGE TO THE SCREEN

Todt has remained humble even as his book found great success. Everyone loved the characters and storyline, and the book even contained some mystery alongside the relationship focus.

As Todt found support from friends, family and romance novel lovers, a new opportunity arose. Jerry had a friend who loved the novel and told Jerry it would make a great Hallmark movie. The friend passed it on to a connection he had with the Hallmark production company.

Todt was amazed and thrilled when Hallmark said they also loved the book.

“It’s not what I set out to do, and then everything happened,” Todt said. “And I thought, maybe this is something I could do.”

Todt said that the film writers took creative control once he signed his agreement with Hallmark. They kept him updated on film and release dates, but mostly Todt had to wait along with everyone else to see what the movie would be like.

The film premiered on Nov. 5 and while the producers made some changes to the setting and characters, overall, Todt was happy to see how everything turned out. He describes the whole process as a learning experience. In the meantime, he’s released a sequel, A Maple Valley Wedding.

He encourages every writer with big dreams to “write every day” and “persevere” in the face of rejection.

To celebrate the movie’s release, Todt gathered with friends and family for a party. He remains incredibly grateful for all of the support.

“The response has been tremendous,” Todt said. “I’m so thankful for the people who took the time to watch the movie and read the book.”

He specifically wanted to thank the Farmville community, as “the support I’ve gotten from the whole town, it’s just been great.”

Todt has some exciting things on the horizon, even though he can’t share them publicly quite yet. In the meantime, cozy up with A Maple Valley Christmas, which is streaming on the Hallmark channel.