There’s a Blood Moon on the rise 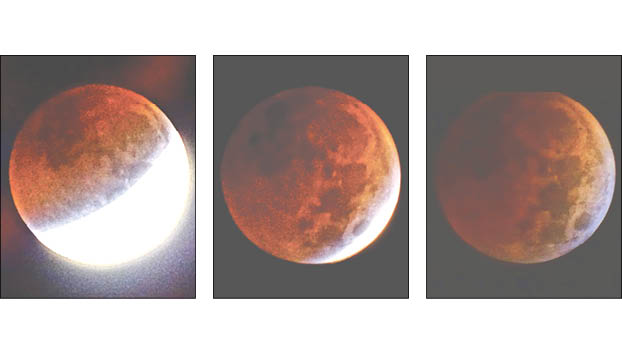 If you looked outside in the extremely early hours of Tuesday morning, you might have noticed the moon looked a bit different than normal. That’s because it was a “Blood Moon”, a visual we won’t be able to see again in full until 2025.

But first, what is a “Blood Moon”? Well, it happens when the moon is in a total lunar eclipse. The moon sits completely in Earth’s shadow, with a tiny portion of light (from Earth’s sunrise and sunset) falls on its surface. Now because these light waves are spread out, they look red. But they don’t always look the same.

In fact, each “Blood Moon” gives a different visual. What do we mean? According to the National Aeronautics and Space Administration (NASA), how red the moon looks during this event depends on three things. First, how much pollution is in the atmosphere at the time. The more pollution, the darker it will seem. Second, how much cloud cover is there. And third, how much debris there is in the atmosphere. Let’s say a volcano erupts. All that ash sprays up into the atmosphere. If you’re trying to look at the “Blood Moon” at that point, it’ll look much darker than normal.

Retired photographer Ronald Card started taking pictures of the progression beginning at 3:15 a.m. on Tuesday, Nov. 8 and finished at 4:30 a.m.