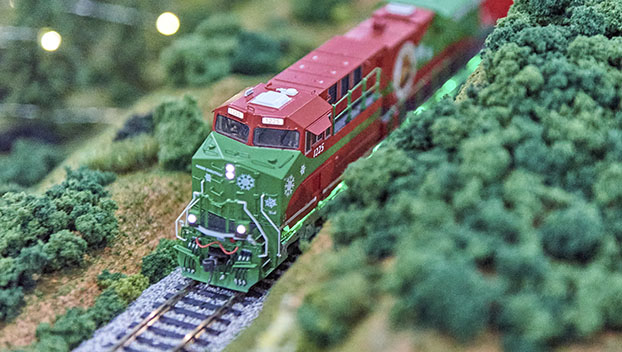 FARMVILLE – Jim Kimbrough has always appreciated the beauty of trains. It began when he was little; his grandfather worked on the railroad and he became fascinated with the complex mechanisms and designs. While his love for trains grew, life, as it often does, got in the way.

Kimbrough “always had it in my mind” and knew one day he’d become a hobbyist. His dream was to create an HO-scale train layout.  Before retirement, he just never had the time to make that dream a reality.

This Christmas, his dream came true. And luckily, Kimbrough isn’t keeping the magic all to himself–this year, he’s opening up his spectacular showcase to the rest of the Farmville community.

Returning to trains after retirement

Once Kimbrough retired, he knew he was ready to explore the world of model trains. It would take time, precision, and careful planning to create the model he wanted, but Kimbrough was all in.

He chose characters that he wanted to be part of his plan, and also knew that Christmas would be a big element.

The complete set-up took about 3 years to create, which is actually less than Kimbrough had anticipated. When he first started, he planned to work on it “several hours a day,” but his plans changed when COVID struck.

“We couldn’t go anywhere, and that really sped it up a bit,” Kimbrough said.

For about a year, he’d spend up to 8 or 9 hours a day working on the project.  One of the reasons the project was so time-consuming was due to the scenery, as Kimbrough said “a lot of it is done by hand.”

Some, of course, can be bought, but Kimbrough loved the idea of creating unique backdrops and additions that wouldn’t be found anywhere else. With all of the time Kimbrough’s invested, it now has an amazing finish and holiday feel.

Kimbrough did it all solo too, taking the time to enjoy each and every aspect. His favorite part? Creating his own holiday town with just his hands and a vision. 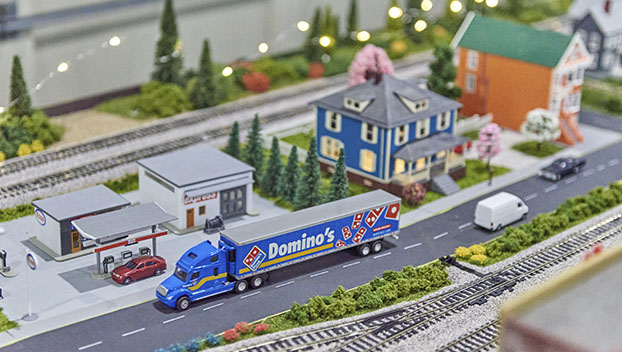 A look at some of the carefully crafted designs in Kimbrough’s model train display.

Building a Christmas world in Farmville

Kimbrough explained that he loves creating the layout and scenery. Amongst other hobbyists, scenery tends to be a favorite design element, allowing each model set to stand out. He also loves to see the whole project come together.

“It’s a little make-believe world in HO scale, you know,” he said.

As Kimbrough set out on his masterful design, he knew he’d need a big space. In fact, he did home renovations in order to create the ideal area for his model set. The train is now 900 square feet, filling up what used to be a 3-car garage.

Kimbrough applauds other hobbyists in the Farmville community.

“I’ve really never seen a bad layout,” Kimbrough said. “They all take a lot of pride in doing them.”

It’s the type of hobby Kimbrough plans to keep tinkering with. He has ideas on how to expand his world and adjust the layout so that it can get even better in the years to come.

A bit more about Kimbrough’s hobby

Now before we talk more about trains, we need to offer this sidenote. For those not part of the model train hobby, you may be surprised to know that the world of model trains is filled with many choices and ways to create unique and beautiful designs.

One of the most prominent is the HO scale, which refers to the size of the train (half of a zero scale, or 1.87mm to 1ft). These are smaller compared to other scales, and with high popularity around the world, offer the most variation in design. With many ways to customize, they are the perfect option for hobbyists. 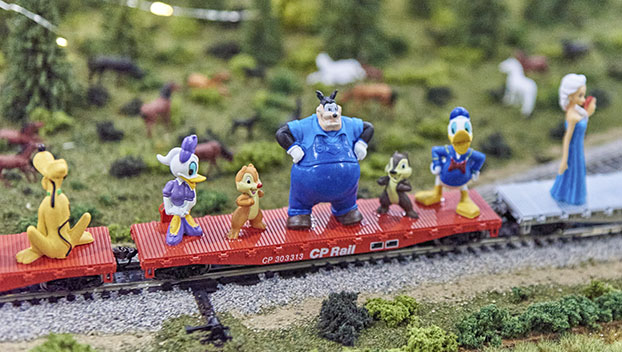 A look at more of Kimbrough’s hand-crafted figures.

Connecting trains to a Farmville Christmas

And a hobbyist is just what Kimbrough is. Initially, he hadn’t really considered building holiday trains, but in the last few years, his family encouraged him to come up with something special for the season.

Now, he has a Christmas train and character trains. Some of the characters that are featured are from Frozen and Paw Patrol, making it great fun for kids and their families.

The trains create a sense of wonder and magic that can be hard to find in today’s bustling world. He uses tea lights throughout the layout, and he dims the regular lights. He said it creates “a whole big Christmas flair.” The trains also make noises and have music. “They’ve got all the bells and whistles,” he said.

He hopes that when folks visit his model train layout, they get a sense of the joy and passion he feels for creating this intricate layout. He’s hopeful he might even inspire others to take up the hobby.

Jim Kimbrough, along with his wife, Susan, will be opening up their home for anyone who wants a peek at the magic. They hosted their first open house Sunday, Nov. 27th, and will open again on Dec. 11th from 2 to 4 pm. Located at 900 Fourth Ave Farmville, the Kimbroughs can’t wait to share a bit of their holiday joy with you.