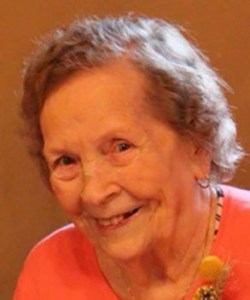 Jo Ann Mullins White, 95 of Farmville, entered into eternal rest on Tuesday, Nov. 1. Born on All Saints Day, Nov. 1, 1927 in Van, West Virginia, she was the daughter of Dewey and Beatrice Deem Mullins.

Following high school, she worked as a PBX operator in Charleston, West Virginia. In 1948, she married Clifton “Buck” White, also of Van, West Virginia. Desiring a better life for their young family, they relocated to Baltimore, Maryland, where she opened the Chatterbox Day Care and Kindergarten. Following this successful venture, the White family eventually moved to Farmville, where she was the owners of two businesses LaBelle Femme Beauty Shop and Jean n Jo’s Craft Shop. She was also on the founding committee for the Farmville Christmas Shop.

One of the greatest pleasures for Jo Ann and her husband was hosting the annual Echo Acres Family and Friends Reunion for 40 years. In their retirement years, Jo Ann and her husband, Buck, enjoyed spending their winters in South Florida, including the Florida Keys, where they made numerous friends from across the county.

She was preceded in death by her husband of 63 years, Buck White; two sisters and three brothers.

Family wishes to thank of her Centra Hospice nurses and staff for their unending kindness and dedication, especially Lenore Greene.

There will be a private graveside service for immediate family and a Celebration of Life for extended family and friends in early April 2023.

Arrangements are by Puckett Funeral Home of Farmville.

Memorial contributions may be made to Centra Hospice.