Feeding Farmville: A meal with heart 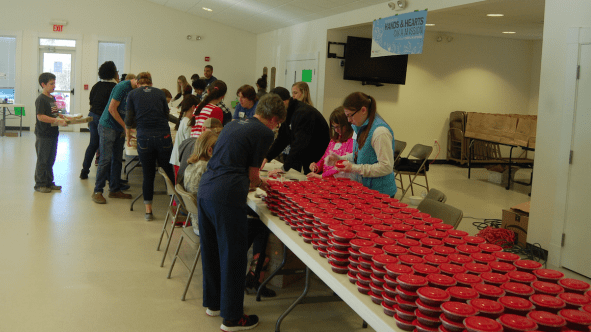 FARMVILLE – When Reverend Matthew Sorenson of St. John’s Lutheran Church made the move from Niagara Falls to Farmville, he wanted to do something special for the residents that hadn’t been done in the town before. It eventually led to the project known as Feeding Farmville.

He brought with him from his days in Niagara Falls a memory of taking part in a meal delivery outreach, where he volunteered as a driver. One Thanksgiving morning, he took part in delivering meals with his daughter to the residents of Niagara Falls.

“When we finished handing out meals, my daughter looked up at me and said, ‘this is the best Thanksgiving ever!’” Sorenson said. “We hadn’t even gotten home to sit down to eat our own Thanksgiving meal yet.”

He witnessed the power of helping others through his daughter’s eyes, and it gave him something to hold onto that spoke volumes to his heart. From that moment, he knew he wanted to do something similar in Farmville.

Faith in something bigger than men

In 2016, Sorenson became determined to put together a community project where St. John’s Lutheran Church would be able to form an outreach to feed 500 people. Some church members said it was impossible, and that there was no way the church would be able to feed that many people. He agreed with their sentiments, stating, “We can’t, but God can.” That first year, they were able to garner the support needed to meet their goal of 500 people – and support for the project has only grown year after year.

All these years later, the community has come together to not only make Feeding Farmville possible – but to make it flourish more than Reverend Sorenson had imagined it could. Support from local businesses has been incredible. Entities such as restaurants have reached out, offering to cook turkeys for the meals. Local bakeries have said they will donate fresh rolls. Volunteers will be baking homemade pies, and the love and dedication from countless volunteers both in the kitchen and on the road to deliver hot meals all come together in a mélange of love for their community.

Sorenson states the organization was so blessed with donations, both monetarily and in terms of food items last year, that they were able to go above and beyond to feed individuals this past Easter. They hope to be able to do the same again next Easter.

“We want to be good stewards of what God blesses us with,” states Sorenson.

When asked about volunteer opportunities, Sorenson says “we’ve had baseball teams and marketing companies step in and help in so many ways. We love to see individuals and organizations volunteering their wheelhouse and the blessings God has given and putting them to use.”

A bit more specific, he says the area they need the most help with right now is driving.

“We send drivers out in teams of two. As a driver, you’re going into the great unknown,” he added. “A lot of people are uneasy in doing so. Yet, the reward is incredible.”

Many drivers have really special experiences with some of the people they deliver to, Sorenson explained.

“Some of them come back with tears in their eyes,” he said. “It’s all about sharing the love of Jesus.”

Feeding Farmville is expected to provide 800 hot meals this Thanksgiving to residents within a 30-mile radius. Each meal will contain all the items in a traditional Thanksgiving dinner. Volunteers from Feeding Farmville will deliver individual, pre-portioned dinners to homes on Thanksgiving morning. More than that, the hope is to share some time and prayer with those the meals are delivered to. There are no requirements to receive a meal. However, the organization does ask that people request just 1 meal per person in the household.

When asked what the most rewarding part of what Feeding Farmville does, Project Manager Bonnie Arney states, “When the volunteers come to the church, the fellowship and love shown for each other is just incredible. They love to help their neighbors. I just want to stress that people really want to do something to help.”

Sorenson states in response, “Experiencing that love. Every year I deliver some of the meals personally. I never get tired of somebody coming to the door and crying with me, hugging me, and thanking me. Those experiences with God’s love.”

How to get involved with Feeding Farmville

Arney states current needs aside from drivers are yams in #10 tin cans. Those have been difficult to find in stores this season.

There are currently 68 businesses, organizations and churches taking part in the initiative to feed Farmville this year.

If you or your organization would like to be a part of donating to Feeding Farmville, you can reach them in several ways. First by phone at 434-392-1875, or you can make a check out to: St. John’s Lutheran Church, 1301 Milnwood Rd. Farmville, Virginia 23901.