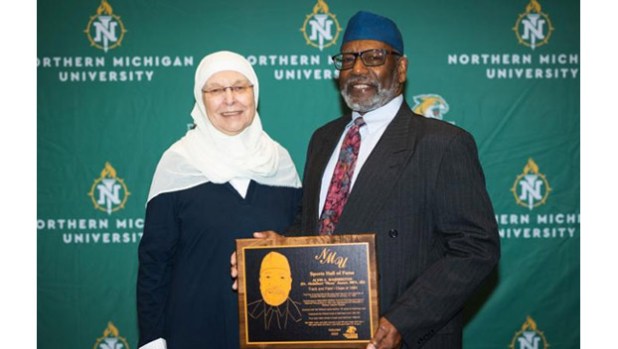 Dr. Ansari stands with his wife Diane after being inducted into the Northern Michigan Hall of Fame. 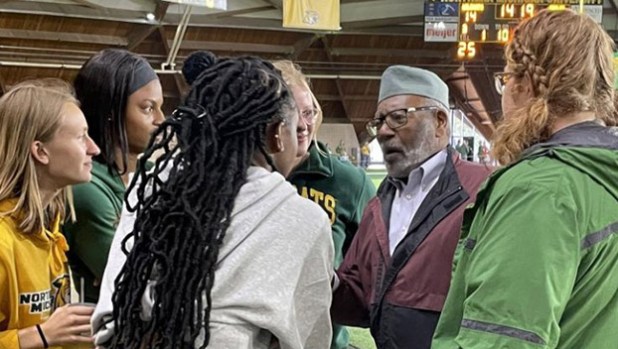 Dr. Ansari talks with members of the NMU Women’s Track and Field Team after his induction.

Albeit soft-spoken and full of humility, Buckingham County resident Dr. Abdulbari Musa Ansari is beaming with pride these days. That’s because back in September, he was inducted into the Northern Michigan University Sports Hall of Fame.

Each year, Northern Michigan University selects six former athletes from hundreds nominated to be inducted into its Sports Hall of Fame. Ansari matched world and national records in the 60-yard dash in 1961. His record came at a meet at Central Michigan University, tying the U.S. and world record at the time of 6.8 seconds, set by Wilma Rudolph earlier that year.

“It was really a great experience. Everybody remembers their alma mater at one point, but one of the greatest honors is when your alma mater remembers you,” Dr. Ansari remarked. “To be back at the school and actually have the school give me recognition was so wonderful. My wife Diane deserves a lot of credit because this wouldn’t have happened without her nomination.”

Ansari’s family history can be traced back to the days of enslavement in the Crozet area. Before going to NMU, he lived in New Jersey and his achievements almost didn’t come to fruition. Spending time in reflection, he often thinks back to what did and almost didn’t happen.

“I remember the great teams that we had and a lot of the individuals, but the thing that really went through my mind was what got me to be at Northern and to graduate. Northern was about 890 miles from Elizabeth, New Jersey where I lived. I only got to go home once during my freshman year because it took about 42-43 hours one way on a train. Even though I had a scholarship, when I went home that summer, I had planned not to go back,” Ansari recalled.

During that summer, Ansari spent all his money he made so that he could say he would be unable to afford a ticket to go back.

The life-changing event was his mother – Avis Louise Jackson Washington – telling him he was not going to quit when times were challenging. Ansari’s father died when he was eight years old and his mother was raising five children.

“She asked when I had to go back and I told her I couldn’t go back because I didn’t have the train fare. She didn’t say anything,” relayed Ansari. “A couple days later, she gave me the money for the ticket and was ironing my shirts and putting them in the suitcase. I’m grateful to my mother because without her saying anything, she sent me back to Northern.”

The rest, as they say, was history.

A history of achievement

The NMU alumnus has been a secondary school math teacher, assistant bank manager, regional human rights manager, director of community support services, attorney-at-law and adjunct professor, among several other distinguished titles. You can now add Hall of Famer to that list.

“Sports were a way for me to get a scholarship to go to school because we didn’t have the money,” pointed out Ansari, so appreciative of all the honors that have come his way.

“When I look back at it now, Northern provided me with the opportunity to learn who I was more and the tools that I needed in terms of knowledge, skills and ability to be able to apply them to whatever I wanted to do. A lot of people talk about themselves in terms of sports, but for me, it really was the contribution of the people around me that made the difference. The talent was there, but it was the encouragement of my coaches and teachers. When I graduated, I kept listening to those messages, including from my family from the days of being a child to now. That meant so much to me.”

‘Listen to the messages’

Ansari’s family relocated to Buckingham County in 2005, seven years after returning to Virginia from Michigan. He and Diane, who have been married 58 years, have five children, 16 grandchildren and three great-grandchildren.

Rather than his accomplishments in sports, he hopes those remember most who he is and how he approached things in life beyond track through education and his work.

“My focus has been to utilize whatever knowledge and skills that I had to help better the organization that I work for or the people that I worked with,” Ansari said. “We always had small teams, so we had to work together in order for us to compete against some of the larger schools.”

Through Ansari’s remarkable journey, he imparts one valuable piece of advice.

“Listen to the messages to help you improve to be better today than yesterday and tomorrow than today,” Ansari stated.