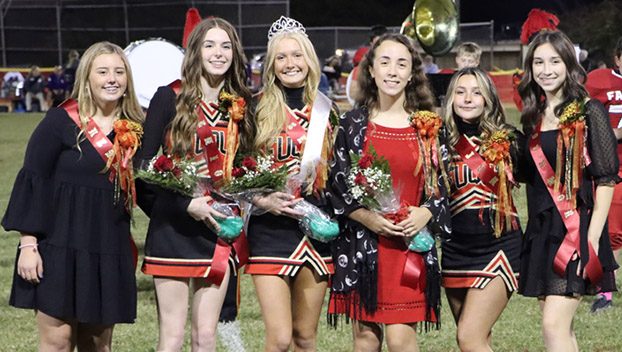 Fuqua School has a new queen. Kendall Moore was crowned as the 2022 Homecoming Queen during halftime of the Friday, Oct. 14 football game against Norfolk Christian Ambassadors. Kendall was escorted onto the field by her father, Russell Moore and crowned by the 2021 Homecoming Queen, Meredith Schmidt. Football captains Nate Reed, son of Crystal Robertson of Farmville; Jordan Ledger, son of Mr. and Mrs. Steve Ledger of Burkeville; and Matthew Pembelton, son of Mr. and Mrs. Ray Pembelton of Amelia, assisted Meredith in crowning Kendall. The event concluded with captains giving roses to each senior princess. The crowd then enjoyed the halftime performance by the cheerleaders and the band.

“It was such an exciting night, I’m still in shock!,” Moore said.

Kendall is the daughter of Mr. and Mrs. Russell Moore of Farmville. She is a member of the Math, Science, English, History and Latin Honor Societies. Kendall is also a member of the varsity cheerleading team, where she serves as captain. She currently serves as the senior class vice president along with being a member of the Interact, Youth for Christ and Readers Clubs. She is also the recipient of the Hollins University Book Award and a member of Friends of Fuqua. Outside of school, she is on the competition dance team at Carrington and Crafton Academy of Performing Art. In her spare time, she enjoys dance, dance and more dance, along with spending time with friends and family, especially her brother Parker.