Cisneros to visit as part of reading series 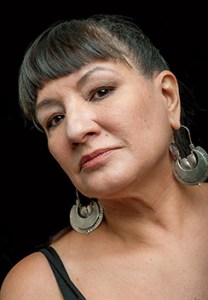 Sandra Cisneros, a nationally acclaimed poet, short story writer, novelist, essayist, performer and artist whose work explores themes of multiculturalism and the lives of the working class, will speak at Longwood University in November as part of the Longwood Authors Reading Series.

Cisneros will read from her work on Tuesday, Nov. 8, at 8 p.m. in Blackwell Ballroom in the Maugans Alumni Center. The reading will be followed by a reception and books signed by the author will be available for sale. The event is free and open to the public. The Authors Reading Series is made possible through a collaboration of the Longwood University Arts Council, English and modern languages department, Cook-Cole College of Arts and Sciences, Cormier Honors College, office of the provost and Greenwood Library.

Regarded as a key figure in Mexican-American literature, Cisneros is perhaps best-known for her coming-of-age novel The House on Mango Street, published in 1983. It won several major literary awards, including the American Book Award from the Before Columbus Foundation. The novel has sold more than 6 million copies, has been translated into more than 20 languages and is required reading in middle school, high school and universities across the country. Mary Carroll-Hackett, professor of creative writing and director of the Authors Reading Series, said faculty members have been preparing for Cisneros’ visit by teaching her fiction and poetry in many of their classes. Cisneros was originally scheduled to visit campus in March 2020 but it was postponed due to the COVID-19 pandemic.

“Sandra Cisneros is a powerful, trailblazing writer, and we are excited to welcome her to campus and to Farmville next month,” Carroll-Hackett said. “Here in the heart of Virginia, a place thrumming with working-class lives, I’m confident her beautiful writing will speak to both our students and to the members of our surrounding communities.”

Her more recently released works include the Spanish and English story Martita, I Remember You/Martita, te recuerdo (2021), and a poetry collection, Women Without Shame/Mujer Sin Vergüenza (2022).

Cisneros was the first female Mexican-American writer to have her work published by a mainstream publisher, and biculturalism and bilingualism are important aspects of her award-winning writing. She was born in Chicago and is a dual citizen of the United States and Mexico. Cisneros is widely acknowledged as a pioneer in the Chicana literary field, which is literature written by Mexican-American authors emerging from the Chicana feminist movement.

Cisneros received National Endowment for the Arts fellowships in 1981 and 1988. More recently President Barack Obama presented her with a 2015 National Medal of Arts; she was awarded one of 15 new Ford Foundation Art of Change fellowships in 2017, and in 2019 she received the PEN/Nabokov Award for Achievement in International Literature.

Cisneros founded two nonprofits that foster the careers of emerging writers: the Macondo Foundation and the Alfredo Cisneros del Moral Foundation, which was created in memory of her father.

Cisneros received a Bachelor of Arts in English from Loyola University of Chicago in 1976 and a Master of Fine Arts in creative writing from the University of Iowa in 1978.