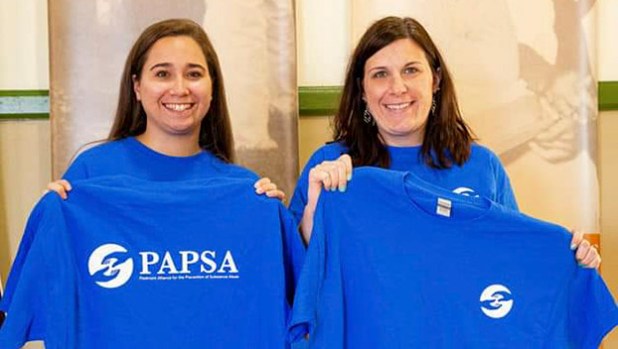 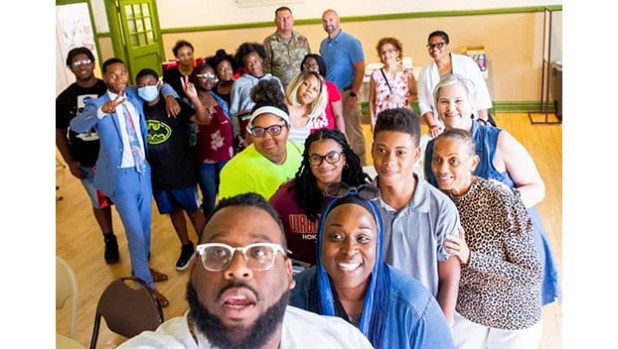 Elder Warren Reid gets a selfie with most everyone in attendance at a recent PAPSA event. 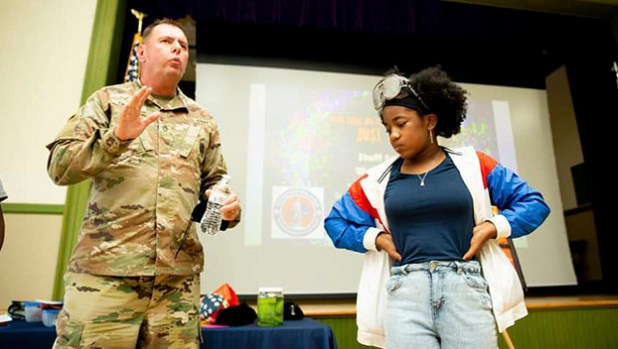 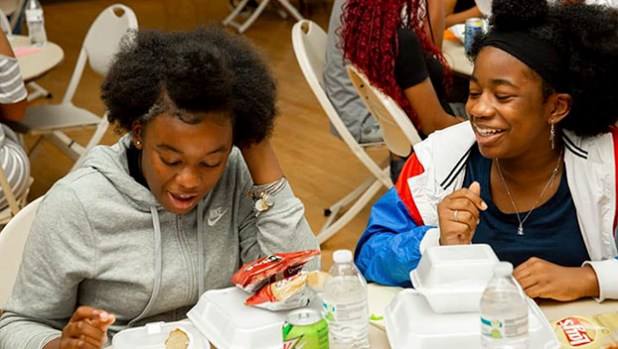 Local youth are enjoying lunch that was sponsored by United Community Nexus and catered by Karen White.

Do you live in the Piedmont District and need access to substance abuse support, but don’t know where to look? Are you interested in training on how to respond to an opioid overdose emergency? Want to learn more about the ways you can help address substance abuse in your community? The Piedmont Alliance for the Prevention of Substance Abuse Coalition, or PAPSA, has you covered.

Formed in 2018, the coalition collaborates with over 50 state agencies and organizations to increase awareness, knowledge and readiness to address substance abuse issues in the counties of Amelia, Buckingham, Charlotte, Cumberland, Lunenburg, Nottoway and Prince Edward.

“To attack local problems it requires, what? Local solutions, right?” said Jill Ahmad, the coalition lead of PAPSA. “Every county is not the same. Every organization is not the same.”

A HISTORY OF PAPSA

The coalition are active members with the South Central Virginia Non-Profit Network (SCVNN), Community Coalitions of Virginia (CCoVA) and Community Anti-Drug Coalitions of America (CADCA). Ahmad said these relationships keep PAPSA connected with current information on the needs of its communities, especially substance misuse in the area and in the state.

“In coalition work, data driven and evidence based strategies help our work in the community to be more impactful and effective,” Ahmad said.

The number of total fatal drug overdoses in Virginia reached an all time high in 2021, with 2667 total fatalities, according to the Virginia Department of Health (VDH). This is an increase of 40% compared to overdose fatalities in 2019. Fentanyl caused or contributed to death in 76.4% of all fatal overdoses in 2021.

“In our area we’re looking at the opioid misuse,” said Ahman. “We’re looking at alcoholism, meth, marijuana and the counterfeit drug industry is growing.”

HOW DID IT START

Sasha S. T. Johnson is the PAPSA co-chair and the director of the Office of Education and Prevention Programs at Longwood University. The most recent substance abuse coalition prior to PAPSA’s creation was the Substance Abuse Prevention Partnership (SAPP), which she said community members were engaged and participated in but reluctant to serve as Chair. The majority of the work fell to the Crossroads Community Services Board (CSB) who had to step away when the coalition absorbed too much of the staff’s time.

In 2018, grant funding from the Virginia Department of Behavioral Health and Developmental Services (VDBHDS) became available through the state Opioid Crisis Intervention program. Crossroads CSB was tasked with building a community coalition to address the opioid crisis, and PAPSA was born in September of that year.

Crossroads CSB “really spearheaded this effort to get this coalition established in our area,” Ahmad said. “They understood the need for us to come together as a community to really attack substance misuse.

Johnson said she thought Ahmad would be an excellent addition to the coalition because of her connections within the community and her role as founder and president of United Community Nexus LLC, a community engagement and outreach service, which she still holds now. Ahmad was nominated to serve as chair and graciously accepted the position in April 2020.

The VDBHDS grant provided scholarships to send three leadership team members to the Community Anti-Drug Coalition of America (CADCA) Leadership Conference in National Harbor, Maryland this past January to learn about coalition best-practices for addressing substance abuse issues. And this past August, Ahmad was able to attend CADCA Mid-Year Training Institute in Orlando, Florida.

WHY THE NEED? COVID’S IMPACTS

PAPSA’s work is more important now than ever as the pandemic exacerbated an already growing drug abuse problem.

In 2021, the Piedmont District surpassed the state average by 21% for average monthly emergency department visits for unintentional drug overdose per 100,000 people.

“This pandemic has borne a new type or more serious form of substance misuse in this country and a new type of individual,” Ahmad said. “After two years of isolation you can only imagine there are those who have been impacted by trauma, severe loss, high levels of stress. Folks are struggling with mental health and behavioral health challenges and are looking for ways to self-medicate.”

The pandemic also took its toll on the newly formed coalition, said Kathy Reed, Prevention Coordinator for Crossroads CSB. She is also responsible for reporting coalition activities to The Department of Behavioral Health and Developmental Services which provides funding to support PAPSA. The coalition was no longer to meet in-person but needed to continue with their needs assessment or work on an action plan, Reed said.

The coalition has held its monthly meetings virtual since April 2020 and started holding hybrid (virtual and in person) meetings in May of this year.

WHAT TYPES OF SUPPORT DOES PAPSA PROVIDE?

The coalition’s first community event took place in response to Virginia’s legalization of marijuana on July 1, 2021. The REAL TALK about TEEN DRUG USE: JUST THE FACTS program was held the same day which focused on the consequences of substance use on the adolescence brain, the legal consequences of substance abuse and to provide factual information in a format designed for young audiences. Due to the pandemic, 25 youth from six local youth groups were invited to participate “in hopes they will return to their circles and share what they learned,” Ahmed said.

A second REAL TALK event took place on April 16 of this year over Easter weekend, where the coalition welcomed over 30 youth from the ages 13 on up and over 70 people in total attendance. Difficult conversations around substance abuse were made easy to understand through fun activities, like when Deputy Hathaway and his K9, Sig, did a demonstration for everyone.

“To watch it fall into place and the smiles on everyone’s faces made it all worthwhile,” Ahmad said.

“Many community partners participated in these events which helped to make it a huge success,” Reed said.

PAPSA can be spotted in the community providing resources about substance abuse from tables and booths set up during community events, like when they recently participated in the Charlotte County’s National Night Out and a community celebration day at Branches Run Baptist Church in Amelia County.

“We make sure it is in as many agencies, organizations, and schools as possible so that when people are looking for help, we’re present,” Ahmad said.

Organizations like Fixed Ministries are invited to PAPSA events, where the coalition makes sure that community members are aware they provide in-home treatment. The faith-based organization primarily takes in those 18 and older, but will do whatever they can to help anyone who is living with and managing substance issues, Ahmad said.

Ahmad describes PAPSA’s advocacy towards combating substance abuse as “not just being present in the trenches of the community, but being at the board tables where decisions are made.”

PAPSA is now a part of a mental health and substance abuse team led by Centra Health, a regional nonprofit healthcare system based in Lynchburg which serves as the dominant provider of critical medical services in central and Southside Virginia. The group was formed to come up with data-driven and evidence-based strategies to combat substance abuse issues in the area based on a recent community needs assessment, which Ahmad said PAPSA is “honored” to be a part of.

Being at the table with the Centra and the health department means “having a voice to raise our hands and say, ‘you know, as we’re managing COVID and all of these other community ailments, let’s make sure that substance abuse issues and mental health is getting some attention as well,’” Ahmad said.

Managing opioid overdoses is one of PAPSA’s biggest concerns as the number of opioid-related deaths continue to rise not only in the area, but nationwide. The proliferation of counterfeit drugs and fentanyl bought outside of a pharmacy is a problem which Ahmad said youth need to be aware of.

“One pill can kill you, you know,” Ahmad said. “I heard one story of a young man out of the area, he had a headache and a friend gave him what he thought was a percocet and it was not.”

Another obstacle PAPSA has to face is the challenge of identifying mental health professionals and outpatient treatment facilities in rural areas which may not be accepting new patients or accessible to residents.

Ahmad encourages legislators and health professionals to come see rural areas themselves and expand programs to provide more outpatient and inpatient treatment – which she says her community is in absolute need of.

“As a coalition we’re great, but we need to be able to have strong and consistent referrals to those who are reaching out for help,” Ahmad said. “The waiting lists are very long and we’re kind of losing people before we can even get started.”

Ahmad has been invited to discuss combating the drug epidemic with Virginia Attorney General Jason Miyares during a “Coffee with the Attorney General” event on Aug. 17, due to her participation in CADCA training and leadership conferences for the past two years.

“I’ve asked them to send invitations to as many of our active coalition members as I could,” Ahmad said.

PAPSA is also encouraging people to attend the “Lunch and Learn” health series to hear from experts on addiction. The series will take place at noon on the third Wednesday of each month until Nov. 16 at the Robert Russa Moton Museum.

“I’m excited about where we’re going,” Ahmad said. “And post pandemic, you’ve got to understand, we’re hitting the ground running.”