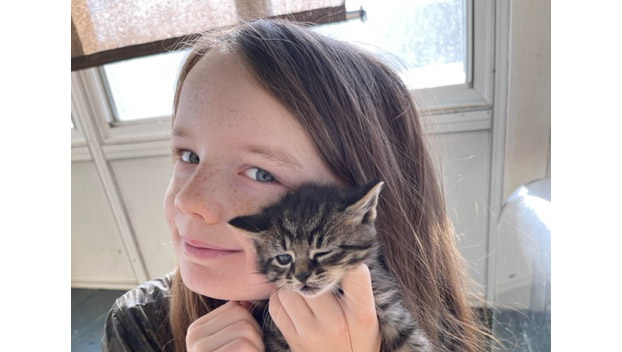 Hi! My name is Page McWilliams. Once a month, I’ll be writing a review on books. I’m 12-years-old, in the seventh grade and I have two sisters. I like to draw and I like to write. I have two best friends, two dogs, and six cats. I also like to share books I enjoy.

I like books because you either see a picture in your head and believe that’s what something really looks like, or you have a picture and more vivid reactions. My favorite books are graphic novels and chapter books.

Let’s dive into what I have for you all today; a review of the “Black Sand Beach” graphic novel series by Richard Fairgray. Part horror, part thriller, and part dark comedy, the series is about four kids, Harry (Dash), Lilly, Elanor, and Andy, who are spending the summer at Black Sand Beach, which is populated by purple-skinned barbarians, and monsters that eat faces and wear them later. Dash thinks he hasn’t been to Black Sand Beach in six years, but he really spent the previous summer there. When the kids realize that Dash has no memory of the earlier summer, they work together to figure out why.

Here’s an example of what they learn.

“This… it’s what I hit the snake with.

That’s one of my JOURNALS! Why do-

I didn’t steal it… I umm- I found it in the lighthouse. That’s not the weirdest part. Look at the dates.

This is- this is my journal from last summer.

Yeah, and every entry in there is about Black Sand Beach. You were HERE last summer, Dash.”

Guaranteed to send shivers up your spine, kids will be enthralled by the adventures of Dash, Andy, Elanor, and Lilly, the Molchuks, and monsters like Umbra and Doug. (Who wouldn’t be enthralled by a doughy monster called Doug?)

I would give it a solid 9 . stars. It’s a mysterious and sometimes scary series, full of creepy and often detailed illustrations, that will leave kids thirsty for more-of the book that is, not the water on the beach. (I’ve heard beach water tastes nasty.)

The only reason I took off half a star was because I feel that some of it didn’t make a lot of sense, but I’m not sure it’s supposed to. Now, I’m not saying you shouldn’t read it just because it’s scary at times; you should. But try not to run to your parents. I actually recommend it to adults that enjoy thrillers, it’s basically the same thing, just a bit more kid-friendly. I enjoyed it because it has all sorts of weird things that capture your mind. It’s got lots of bad jokes and good humor. Similar books I feel are “Cardboard,” “Ghostopolis,” and “Badisland,” by Doug Tennapel (not monster Doug).

If you like “Black Sand Beach,” I’d also recommend the “Amulet” series by Kazu Kibushi. The ninth book should come out soon. You may also like “The Cardboard Kingdom,” by Chad Sell. That’s all for today! Hope you enjoyed it!