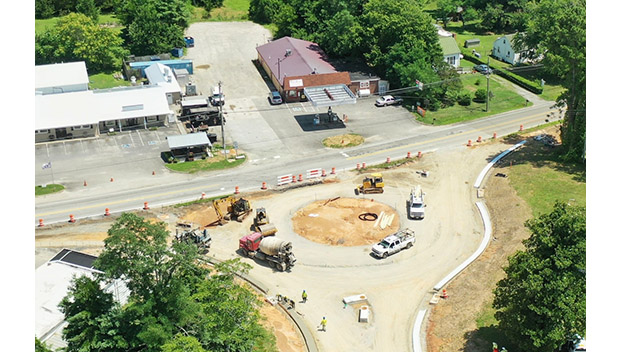 KINGSVILLE — It might not be completely finished, but the Kingsville roundabout will open for traffic next week. Officials from the Virginia Department of Transportation (VDOT) told The Herald they’ve narrowed it down to one of two dates.

“We spoke with the contractor and it’ll either be Aug. 15 or 16,” said Len Stevens. He works as communications manager for VDOT’s Lynchburg district, of which Hampden Sydney is a part.

“There is one little caveat,” Stevens said. ‘There’s still asphalt work to be done, along with some masonry, some aesthetics.”

That’s where the caveat comes in. Yes, the roundabout will open next week, but you’ll still see crews working on it for a while. Since classes start at Hampden-Sydney College Aug. 22, VDOT wanted to make sure it was at least working by then.

Local residents had also been questioning why the project didn’t meet its original opening date of Aug. 9.  That was due to a number of things, Stevens said.

“It has been a combination of material availability, contractor scheduling/availability of specific trades, and weather delays,” Stevens said. “The subcontractor thought it could be [Aug. 9], but we’ve had a lot of weather delays.”

Those weather delays came in the form of both thunderstorms and intense heat, Stevens said. As the heat climbed near 100 degrees Fahrenheit several days last week, workers had to take longer breaks or stop completely. Stevens also pointed to heavy thunderstorms, especially over the last week. That slowed down work as well, he added.

Since the project started, people have raised questions about it. The Kingsville roundabout is being built at the intersection of Routes 133 and 692. Why not just build it on Route 15 instead, as that’s right next to it anyway?

“We try to do these at intersections, not on the highways,” Stevens said. “We want to keep speeds elevated on the highway, to move traffic. In this case, we don’t want to slow down traffic on [Route] 15.”

These also aren’t chosen at random. Stevens said VDOT considers intersections for a roundabout only after local governments ask.

“The requests come from the localities,” Stevens said. “They have to ask for it to be put on the list.”

Why remove a stop light at that intersection and make this change?