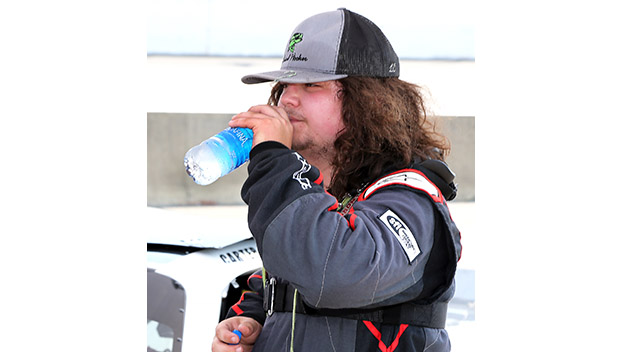 Many people may not immediately recognize Carter Russo, but if the 16-year-old from Rougemont, North Carolina continues his steady progression in South Boston Speedway’s (SBS) Budweiser Limited Sportsman Division that will change.

Russo, a rising junior at Orange High School in Hillsborough, North Carolina, has spent the 2022 season quietly improving and steadily making his way forward in his first season of racing at the .4-mile SBS oval.

Entering the 50-lap Budweiser Limited Sportsman Division race that will be part of the Davenport Energy Night event on Saturday night, Aug. 6 at SBS Russo sits in third place in the division point standings with four top-five finishes and nine top-10 finishes. Russo has three top-three finishes that include two second-place finishes and a third-place finish. His most recent runner-up finish came in the track’s last event on July 16.

“It’s been a good year for my first year here and racing against this much competition,” Russo remarked.

Consistency has been a hallmark of Russo’s season at South Boston Speedway. His ability to finish in and right around the top five every race is what has vaulted him into the top three in the division point standings.

The success Russo has enjoyed this season has come as a little bit of a surprise.

“We really didn’t know how we were going to sit because this is a NASCAR track and there is real good competition up here,” Russo said.

“We were just hoping to be competitive. We didn’t know what we were going to have. We came up here and found we were pretty good.”

As is the case with many racers, Russo started racing go-karts as a youngster and took gradual steps forward, finding success along the way.

“One day I went to an indoor go-kart track and got into a league that had events every Saturday morning,” Russo explained.

“Those guys started getting Bandolero cars and I got interested in it. I went and tested to make sure I’d like it and wasn’t way off or anything. I won a national championship and a state championship in Bandoleros in 2020 in the Summer Shootout. I moved up to a Limited Late Model last year at Orange County Speedway and finished second in points and won Rookie of the Year there.”

The Davenport Energy Night race day schedule has grandstand gates opening at 5:30 p.m., qualifying starting at 6 p.m. and the first race of the night getting the green flag at 7 p.m.

Advance adult general admission tickets are $10 each and may be purchased online at www.southbostonspeedway.com or by calling (434) 572-4947.